Laughton is a village in Lindsey, the northern part of Lincolnshire, found about six miles north of the nearest town, Gainsborough[1]

Nearby is Laughton Forest, mostly privately owned but leased to the Forestry Commission: the forest was created in the 20th century on a sandy heath.

Laughton is listed in the Domesday Book of 1086 as "Lacestone" and "Lastone", with 29 households.[2]

Dr Roger Dalyson founded a village school in the reign of James I; a new school-house was built in 1821, funded by Isabella Ingram-Seymour-Conway, Marchioness of Hertford. [3] The Ingram family were the local landowners, giving their name to the Ingram Arms public house.

The parish church, All Saints, dates from the 12th century and is built in limestone. It was restored and the chancel rebuilt in 1894 by Bodley and Garner. The church is a Grade I listed building. 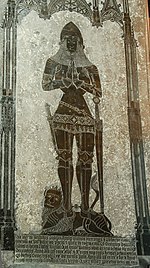 Monumental brass in All Saints

In the south aisle is a full length monumental brass, made in about 1405, showing a knight wearing the style of armour worn at the Battle of Agincourt (1415), with Gothic-style canopy, reset in 1549 with new imitation Gothic-style inscription, to serve as the ledger stone for William Dalison (who died 1546) of Laughton, Sheriff of Lincolnshire in 1546 and Escheator of Lincolnshire. It is of a deliberately anachronistic style, made in the Renaissance to commemorate an Elizabethan gentleman but styled as if two centuries earlier. In style and design similar to at least three surviving brasses found elsewhere in the land, namely those of:

The village of Wildsworth is two and a half miles to the west, on the bank of the River Trent. It had a yellow-brick church, dedicated to St John the Divine, built in 1838 by Charles Biggs. It was declared redundant by the Diocese of Lincoln in 1982 and demolished two years later.[1][4] The ruins are still Grade II listed (described as 'disused').[5]