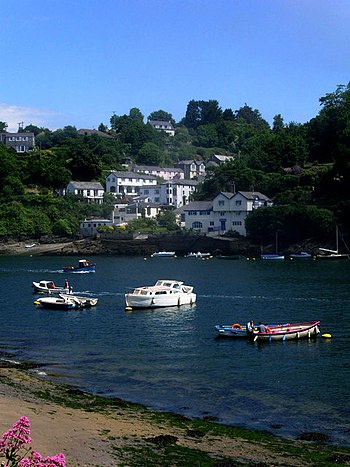 Across the Fowey at Fowey

The River Fowey at Golant

The River Fowey (fͻij) is a river in Cornwall, which flows to the English Channel at the village of Fowey.

The river rises at Fowey Well about a mile northwest of Brown Willy on Bodmin Moor, and not far from one of its tributaries rising at Dozmary Pool and Colliford Lake. It flows down from the moor to pass Lanhydrock House, Restormel Castle and Lostwithiel, then broadens at Milltown before joining the English Channel at Fowey. The estuary is called Uzell, from the Cornish meaning 'howling place'). For larger craft the river is only navigable for its lowest the 7 miles.

There is a ferry between Fowey and Bodinnick. The first road crossing going upstream is in Lostwithiel. The river has seven main tributaries, the largest being the River Lerryn.

The section of the Fowey Valley between Doublebois and Bodmin Parkway railway station is known as the Glynn Valley, form the Cornish Glyn, meaning 'deep wooded valley'). The valley is the route of both the A38 trunk road and the railway line (built by the Cornwall Railway in 1859). The railway line is carried on eight stone viaducts along this stretch.

The upper reaches of the Fowey are mainly moorland giving way to woodland and farmland, predominantly livestock. This means that 63.6% of the catchment is grassland, with a further 18.3% woodland and 10.7% arable land. Of the remaining 7.5%, 2.6% is urban or built-up areas, 2.5% is mountain, heath and bog and the remainder is inland waters.[1]

The basin of the River Fowey covers a total of 41,800 acres (65.3 sq. miles)[2] consisting of kaolinised granite on Bodmin Moor, Devonian slates and grits, and valley gravels.[2] Data collected by the National Water Archive shows that average flow at the Restormel monitoring station is 4.78 cubic m/s and is affected by the reservoirs at Colliford and Sibleyback and by abstraction of water for public supply.[2] 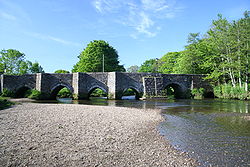 The river runs through two Sites of Special Scientific Interest, one of which is also part of a National Nature Reserve. The Upper Fowey SSSI is a floodplain on the southern slopes of Bodmin Moor and is designated for its wet heath vegetation and herbaceous valley-floor mire communities.[3]

Lower down the river at Golitha Falls part of the woodland is designated a National Nature Reserve and is within the Draynes Wood SSSI. At this point the river runs through a gorge and is of particular importance for ″lower plants″ such as liverworts, mosses and lichens.[4][5] 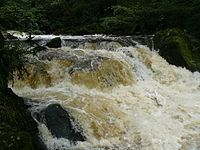 The Fowey valley is designated as an Area of Outstanding Natural Beauty, and beautiful it is, attracting many hikers, holidaymakers and tourists, visiting the sites and places of interest and eating freshly caught fish. The river has very pleasant sites and special paths made for hiking and walking along the banks and in the countryside surrounding the towns.

At Golitha (pronounced Goleetha) are the famous Golitha Falls. (The name is derived from the Cornish word for obstruction.) There is a three-mile riverside walk, from the visitor car park.[6] Golitha Falls is the site of Wheal Victoria copper mine[7]

The River Fowey is famous for its sailing because of its natural harbour. In the past it has been visited by up to 7,000 yachts in one season. Almost all sections of the river have been paddled by kayakers and canoeists: the whitewater sections high up on the moor, all the way down to the estuary. Fowey has an excellent local chandlery.

The Fowey is rich in freshwater fish, so many fishermen descend upon it in season to enjoy their recreation. 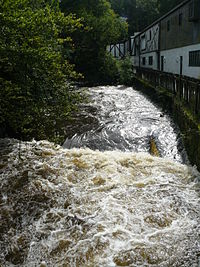 Fowey to Mevagissey Passenger Ferry is a timetabled summer service between Fowey and Mevagissey leaving Whitehouse Slip. Journey time is around 40 minutes. It provides an alternative route to The Lost Gardens of Heligan, finishing the journey by foot or taxi. This service is dependent on weather