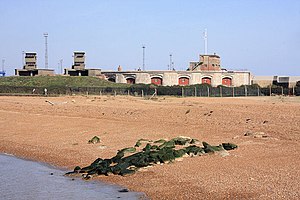 Languard Fort from the Point

Landguard Point is the headland marking the eastern point of the mouth of Harwich Harbour, the deep, broad natural harbour formed by the estuary of the Rivers Stour and Orwell. The Stour and Harwich Harbour divide Essex to the south from Suffolk to the north, and Landguard Point, a finger projecting southward into the North Sea, is the southernmost point of Suffolk.

The point is a small, flat headland, immediately south of the Port of Felixstowe, and facing Harwich to the west. As the entrance to these two major commercial ports, it is a strategic location, and was fortified in less quiet times. Today a ferry runs from Harwich to Landguard Point, for visitors to its fort, Landguard Fort, preserved as a heritage asset and public attraction.

The point is a local nature reserve. There is a bird observatory on the point, housed in disused a fort building and run by the Landguard Conservation Trust.[1]

Landguard Fort, or Langer Fort as it was originally locally known, stands on Landguard Point, built to guard the entrance to Harwich Harbour. The first fortifications from 1540 were a few earthworks and blockhouse, but it was King James I who ordered the construction of a square fort with bulwarks at each corner.

The fort was attacked by the Dutch in 1667, who landed a force of 2,000 men on Felixstowe beach, but they were unable to take the fort: the garrison of 400 musketeers of the Duke of York & Albany's Maritime Regiment with 100 artillerymen with 54 cannon held them off.

The development and strengthening of the fort was continued in the Eighteenth Century and in the Victorian period. In the Second World War had a minor role in a project to float balloon bombs over Germany. Today it is in the care of English Heritage.