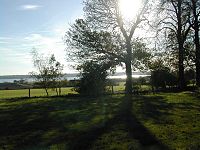 The Stour at Manningtree, Essex

The River Stour is a river which forms almost the whole length of the boundary between Suffolk to the north and Essex to the south, from a little east of Haverhill to the sea.

The Stour is 47 miles long. It rises in eastern Cambridgeshire, by Weston Green and loops through the hills, soon entering Suffolk, and southwards to the east of Haverhill. South of Kedington it meets the Essex-Suffolk boundary and forms that boundary thereafter. Flowing east, it passes through Cavendish, Sudbury and the Dedham Vale, and joins the North Sea at Harwich.

It is one of several rivers in southern Britain known as the Stour.

The River Stour was one of the first improved rivers or canals in Britain. In 1705 Parliament passed 'An Act for making the River Stower navigable from the town of Manningtree, in the county of Essex, to the town of Sudbury, in the county of Suffolk' in 1705, mandating public navigation rights and providing the basis of a joint stock company of London and Suffolk investors who raised £4,800 to cut and manage the river. Although partly supplanted by railways, lighters were still working on the Stour above Manningtree almost until Second World War. As of 2011 they still operate as far as Mistley. 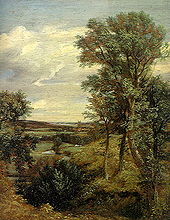 The Stour valley has been portrayed as a working river by John Constable, Thomas Gainsborough and Paul Nash. Constable's connection with the area was especially important, evident in such works as The Stour Valley and Dedham Church c. 1815. Today much of the Stour valley is designated an Area of Outstanding Beauty.[1] It forms the spine of what is known as Constable country.

The River Stour Trust, a waterway restoration group, was set up in 1968 to protect and enhance the right of the public to navigate the River Stour. The Trust seeks to restore through navigation from Sudbury to the sea, following on the successful restoration of the locks at Dedham, Flatford and Great Cornard, by reinstating the 10 remaining locks. Meanwhile, the Trust encourages use of the River Stour by small craft and organises annual events for all age groups and abilities on different parts of the river. River Stour Trust boat trips and private charters, skippered by friendly volunteer boat crew, are available in Flatford and Sudbury between Easter and October. The Environment Agency is the navigation authority for the river. RSPB Stour Estuary is a nature reserve managed by the Royal Society for the Protection of Birds (RSPB). 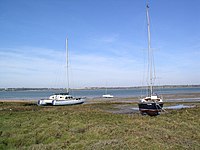