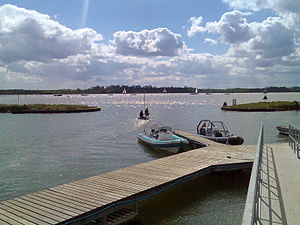 The River Orwell is a tidal river by the coast of Suffolk which is created by the River Gipping. Its source river, above the tidal limit at Stoke Bridge, is known as the River Gipping.[1] It broadens into an estuary at Ipswich in which the Ipswich Dock has operated since the 7th century, and then flows into the North Sea at Felixstowe after joining with the River Stour at Shotley. The Orwell Bridge is a long, high viaduct carries the A14 trunk road spectacularly over the estuary just east of Ipswich.

The origins of the name Orwell are unknown but its is suggested that Or- is an ancient river-name, perhaps even pre-Celtic; but -well is Old English.[2] In A tour through England and Wales written in 1722, Daniel Defoe calls the river "Orwel" (though does this inconsistently).[3] He also mentions that "a traveller will hardly understand me, especially a seaman, when I speak of the River Stour and the River Orwell at Harwich, for they know them by no other names than those of Maningtre-Water, and Ipswich-Water". The writer Eric Blair chose the pen name under which he would later become famous, "George Orwell", because of his love for the river.[4]

The Orwell provides a popular venue for sailing. Interest originally centred on the hamlet of Pin Mill (featured in two children's novels by Arthur Ransome: We Didn't Mean To Go To Sea and Secret Water), which is home to the Pin Mill Sailing Club and its Hard. Ransome had kept his yacht Selina King at the Pin Mill anchorage in 1937-39.

Since the 1970s marinas have opened at Levington (Suffolk Yacht Harbour, pictured), Woolverstone, Fox's (just outside Ipswich), and two marinas in the old Ipswich Wet Dock. Woolverstone is home to the Royal Harwich Yacht Club that was for many years host to the Swordfish 15-foot racing dinghy built by Fairey Marine, in addition to its 12-foot Firefly, a derivative of the National 12-foot dinghy, both designed by the great sailor Uffa Fox. It now hosts a broad range of sailing events, such as the annual 'Junior Race Week'.