Islip is a village on the River Ray, just above its confluence with the River Cherwell in Oxfordshire. It is about 2 miles east of Kidlington and about 5 miles north of Oxford.

This quiet village has fallen into the history books on occasion in view of its strategic position for crossing the Cherwell. It has long been appreciated as a place to live: the remains of a Romano-British villa have been found about ½ mile southeast of the village. King Edward the Confessor was born in Islip around 1004 and tradition holds that he was baptised in a church here. The village is better known for the Battle of Islip Bridge of 1645, and the village changed hands several times during the Civil War, prized for its position 5 miles from King Charles's capital at Oxford.

Traditional holds that King Edward the Confessor was baptised in Islip in possibly 1004. The church in which he was baptised has been replced; the earliest parts of the present building date from about 1200.

The chancel was rebuilt in 1780 and the church was restored in 1861. The church is Islip's only Grade I Listed Building.[1]

The belltower has a ring of eight bells.[2] The parish is now part of the Benefice#Church of England|Benefice of the Ray Valley.[3]

A chapel associated with Edward the Confessor used to exist north of the church. The chapel was damaged in April 1645 in a military engagement in the English Civil War, and in the 1780s it was demolished.

The former Rectory was built in 1689 for Robert South and enlarged in 1807 for William Vincent.[4] It is Islip's only Grade II* Listed Building. 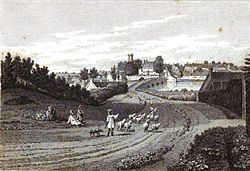 The Domesday Book of 1086 recorded a watermill at Islip. There was one in operation in the village until 1947.

When the Domesday Book was compiled, Islip's system of common fields was entirely on the north side of the River Ray. At some time after this and before 1300, Islip's villagers assarted (cleared) about 200 acres of uncultivated land south of the River Ray and east of the River Cherwell and divided it into strips as a new common field for strip farming. In the 1970s this area of farmland was still called Sart Field.

The Black Death in the 14th century led to the end of week-work in the parish. This was unpaid work that peasants had to do for the Lord of the Manor, and the number of days per week that the Manor could ask was fixed.[5] This system had been reinstated by the harvest of 1357 and was probably stopped in Islip in 1386.

Sir William Fermor was Steward of the Manor of Islip in March 1540. His brother Richard Fermor was a wool merchant. The Fermor family had its seat at Somerton, Oxfordshire and had a number of estates in the northern part of the county.

In the 18th century Islip developed as a staging post on the main coaching route between London and Worcester. A number of the current houses still bearing the names of its numerous coaching inns. It was also on the winter route between Oxford and Buckingham, when Gosford Bridge was impassable.[6] The Plume Of Feathers, also called the Prince's Arms, was built around 1780 reputedly from materials from the demolished Confessor's Chapel. It has since been demolished. The King's Head, also called the Coach And Horses, was built in the 17th century and became a private dwelling in about 1976. There were also inns called the Boot, the Britannia, the Fox and Grapes and the Saddlers Arms.

Some of the Westminster Prebends used to meet with their tenants at the Red Lion.[7]

A company of the Coldstream Guards marched from London to Islip on 30 July 1831 in response to the Otmoor Riots and was billeted in the village.

In 1850 the Buckinghamshire Railway completed its line from Bletchley through Islip parish to Oxford Rewley Road, and opened Islip railway station to serve the village. British Railways withdrew passenger services from the line in 1967 and later Islip station was demolished. Oxfordshire County Council and Network SouthEast reinstated passenger trains between Oxford and Bicester Town in 1987 and opened a new Islip station in 1989. Islip station will be enlarged under Chiltern Railways' Evergreen 3 project and will have new services when the East West Rail Link is completed.

In 1704 the Rector, Rev Dr South, founded a trust for apprenticing two children from the parish each year, and in 1709 he enlarged and endowed the trust to create a school for the poor boys of the parish. A school building was completed in 1710, and in 1712 South finalised the size of the school at not less than 15 and not more than 21 pupils. The school issued each boy with a uniform of a blue coat and a blue cap. In 1812 the number of pupils was increased and in 1815 there were between 90 and 100 boys at the school. By then Dr South's school was following the National School system. By 1833 the number of pupils had fallen to 75 but girls were also being admitted. By 1856 a separate infants' school had been added, but later in the 19th century this was absorbed as the infants' department of Dr. South's school. In 1893 a new school building was completed to replace the original 1710 premises. The combined total of infants and older pupils was 102 in 1889 and 100 in 1906.

In Dr South's was reorganised as a junior school, with secondary age pupils being transferred to the new Kidlington Church of England Central School at Gosford, which left Dr South's with only 34 pupils by 1937. In 1950 Dr South's became a voluntary aided school. In 1954 Dr. South's had 84 pupils. Dr. South's School now has modern premises.[8]

A mummers play, dating from 1780, has been linked to Islip.[9] Mummery continued in Islip until at least 1894 with a play depicting a girl called Molly who fell ill with toothache only to find, on extraction, that a nail was causing her the pain. There is another play featuring Fat Jack, a comic servant.

The Shakespearean scholar and collector of English nursery rhymes and fairy tales James Orchard Halliwell-Phillipps lived in Islip in the 1840s.[10]

Early in the 1920s Robert Graves and Nancy Nicholson lived here, and Graves describes their life in the village in Goodbye to All That.