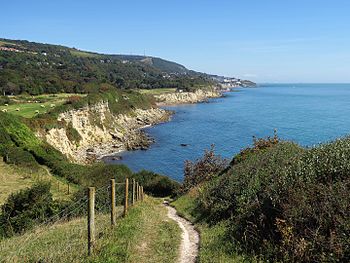 The Isle of Wight Coast Path near St Lawrence

The Isle of Wight Coastal Path is a circular long-distance footpath of some 70 miles around the coastlands of the Isle of Wight, Hampshire’s great southern island. The route follows a series of public footpaths and minor lanes, with some sections along roads.

The path is waymarked in both directions and can be started at any point. It is reckoned to take four days for the fit and keen walker, or a week taking it easy.

Following the coastal path clockwise from the pier at Ryde (SZ594929). 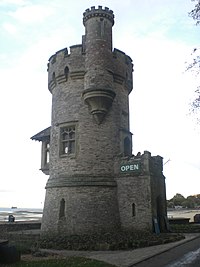 As the route is circular one can join at any point, and walkers frequently walk just one or two stages, using public transport to complete a round trip.

The route is easily accessible by public transport: Ryde and Yarmouth have bus stations. Ferry services from the mainland arrive at Yarmouth, Cowes, East Cowes, Fishbourne and Ryde, all of which are on the route. Additionally, Ryde Esplanade and Lake railway stations are on the path, and Shanklin and Sandown stations are less than half a mile from the route.

There are some sections, notably between Blackgang and Brook, where public transport is limited, and it may be preferable to use a car to access these.

The route is mostly waymarked with signs, showing a seagull symbol and the words "Coastal Footpath" (although a few older signs do not have the seagull). Some signs include the next destination(s) on the route, with the distance in miles.