Brighstone is a village on the Isle of Wight, Hampshire, standing six miles south-west of the island's chief town, Newport, on the B3399 road. 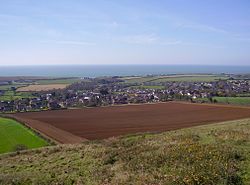 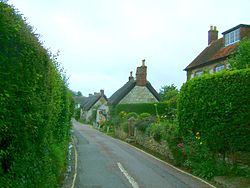 Brighstone is the largest village in the area locally known as the Back of the Wight and extends toward Limerstone and Mottistone. The entire village lies within an area of the Isle of Wight 'Area of Outstanding Natural Beauty' and the coastline here is designated as Heritage Coast and Site of Special Scientific Interest.

In Roman times a villa was built to the north, to take advantage of the clean waters of the Buddle Brook.[1]

St Mary's Church, Brighstone is a venerable old church that has stood for more than eight centuries.

The village also features Brighstone Shop and Museum, owned by the National Trust, displaying exhibitions on village life in the 19th century and contains a wealth of information about the Brighstone lifeboats.[2]

Brighstone is popular with tourists for its thatched cottages and local shops. Several large events are hosted in the village each year, including the Brighstone Show, Art exhibitions and the Brighstone Christmas Tree Festival. The local scout hut functions as a Youth Hostel during the summer.[3]

The village pub is called The Three Bishops,[4] named after three rectors of Brighstone parish who went on to become famous bishops. The first was the 17th-century Bishop Thomas Ken who wrote the famous hymns "Awake my soul and with the sun" and "Glory to Thee my God this night". Bishop Samuel Wilberforce became rector in 1830, and used to entertain his father, anti-slavery campaigner William Wilberforce. Wilberforce Road is named after him, and Brighstone's village hall is called the Wilberforce Hall. The third bishop, Doctor George Moberly, was headmaster of Winchester College before changing career to become rector of Brighstone in 1866.

Another notable person who lived in the village in the 19th century was the clergyman and amateur palaeontologist William Fox, who discovered several species of dinosaur in Brighstone Bay.