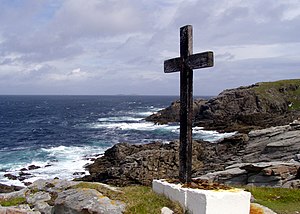 Looking out into the Atlantic from Malin Head 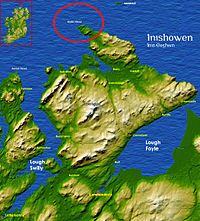 The island of Inishtrahull, also belonging to County Donegal, is further north, approximately 6 miles northeast of Malin Head, while yet further beyond is the county's (and the Republic's) most northerly point; Tor Beg rock.

Mean high tide at Malin Head is the measuring point for heights above sea level on Ireland, the Ordnance Survey “datum”, just as [[Newlyn] in Cornwall serves the same purpose for Great Britain.

Banba's Crown on Malin Head is the most northerly point of the Irish mainland, at C39825984 Banba's Crown is about 10 miles north of the village of Malin.

Banba was one of the mythical queens of Ireland. 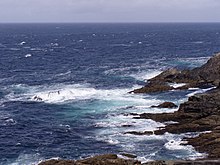 The rugged coast around the Head 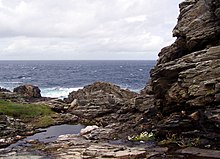 Low tide beneath the cliffs at Malin Head

To the north-east Inistrahull Island can be seen. The first lighthouse on the island was put into operation in 1813, and the light flashes every 30 seconds.

Above Banba's Crown to the east lies Ballyhillion beach, a unique raised beach system of international scientific importance. The very distinct shorelines show the changing relationship between the sea and the land from the time the glaciers began to melt, some 15,000 years ago. At that time County Donegal was depressed by the weight of an immense ice sheet, so the level of the sea, relative to today's shore, was up to 80 feet higher than today. 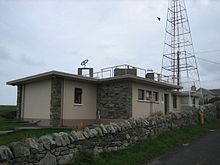 During the Second World War, the Irish government allowed the British government to site two radio direction finders on Malin Head, which was used to monitor U-Boat and aerial activity in the North Atlantic. This top-secret operation was revealed in the The Cranborne Report on Irish neutrality during the war.

After the war, the site became a weather station for the Irish Meteorological Service and a Navtex transmitting station.

It is an ideal vantage point from which to view the Autumnal movements of seabirds such as gannets, shearwaters, skuas, auks and others, on their southward migration flights.