Holwick is a small village in the extreme north of the North Riding of Yorkshire adjacent to the River Tees which forms the border with County Durham. Located in the Pennine hills, it consists of a few houses spread along a road in the pattern of a linear settlement. The population taken at the 2011 Census was less than 100.

It has a public house, the Strathmore Arms which is the most northerly in Yorkshire. It was the location of the first unfurling of the North Riding flag on May 4th 2013. Holwick sits above the River Tees, beyond Middleton-in-Teesdale, and opposite the village of Newbiggin both on the Durham side of the valley. Nearby are the High Force and Low Force waterfalls. The surrounding landscape is high moorland and fells. 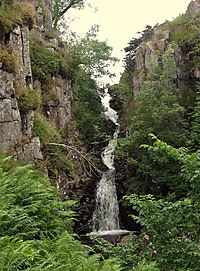 Nearby are the High Force and Low Force waterfalls on the Tees. The surrounding landscape is high moorland and fells with gorges and lesser waterfalls of no little beauty.

The earliest evidence of habitation in the area comes from Mesolithic microliths dating back at least 6,000 years. The people who left them, however, were not settled in the area, but hunted there during the summer. Agriculture began in the Neolithic period, and the remains of buildings have been found from the Bronze Age.

The present-day village of Holwick was first recorded in 1235, though the origin of the name is uncertain, believed to mean either "dairy farm in a hollow" or "in the holly". In addition to hill farming of sheep, lead mining and iron smelting was conducted in the mediæval period, with lead mining and stone quarrying increasing in importance throughout Teesdale in the 18th century.

A suspension bridge was built across the Tees near Holwick in 1704, and collapsed in 1802, killing one. It was repaired but finally replaced in 1830. Substantial quarrying and lead mining did not continue into the 20th century, and the economy of the village has since returned to sheep farming.