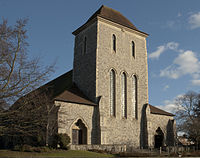 The parish church is All Saints. The church was founded at built in 1851 for the creation of Hockerill parish in 1852. The first vicar, John Menet was also appointed chaplain of the Diocesan Training College for Schoolmistresses, whose buildings have since become the Hockerill Anglo-European College. The 1851 church however was destroyed by fire on Friday 21 June 1935, which made the national news, and parishioners leapt in to try to quench the fire and save the church's valuables, such as they were, until the roof collapsed. A new church was built in 1936-1937; it was a popular cause and the fundraising was helped by the Queen, the Duchess of York and film celebrities.

The interior is in a 20th-century Gothic Revival style. It is simple but noble and made bright and airy by vast open spaces, many lancet windows, and plastered walls. The impressive height of the nave is accentuated by giant drum piers and gothic pointed arches, which hold a coffered wagon roof. Distinctive to All Saints', the chancel's focal point is an east rose window. The furniture is of a classical style, including four pillars that surround the communion table, and sits harmoniously within its gothic setting.

The simple layout consists of a nave and two flanking aisles, leading to a long aisle-less chancel. However, the nave is preceded with a narthex at the base of the tower, containing the baptistery, which is in direct line with the communion table.

Hockerill Anglo-European College is an international boarding school with academy status in Hockerill. It was formerly Hockerill Boarding School when it under local authority control. It became an Academy in 2011.

In 1850, Hockerill was founded as the Diocesan Training College for Schoolmistresses, a teacher training school for women, by the first vicar of the parish of All Saints, Hockerill, the Reverend John Menet. The training school was closed in 1978 and, in 1980, was reopened as Hockerill School when Fyfield School (in Essex) and Kennylands School (in Berkshire) merged. In 1995 it achieved Grant Maintained status and in 1998 became known as Hockerill Anglo-European College.

Hockerill the only international boarding school in Britain offering the offers the [[International Baccalaureate, and has also gained Music College status; the Music College was officially opened by Lord David Puttnam]] on 8 October 2006.

The academic side of Hockerill is divided into four équipes, named after four pioneers in their own fields, and are also given a colour: Brunel (blue), da Vinci (red), Goethe (green) and Pascal (white).