Heythrop Park is an early 18th-century country house a mile southeast of Heythrop in Oxfordshire. It was designed by the architect Thomas Archer in the Baroque style for Charles Talbot, 1st Duke of Shrewsbury, and passed through that family until a fire swept through the house in 1831, destroying the original interior and rendering it uninhabitable. After this the house was sold and restored by subsequent owners.

From 1922 until 1999 Heythrop housed first a Jesuit tertiary education college, and later a training establishment. The house is now the main building of the Heythrop Park Hotel, Golf & Country Club. 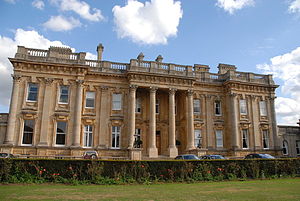 Heythrop Park was designed by the architect Thomas Archer for Charles Talbot, 1st Duke of Shrewsbury.[1] Shrewsbury had travelled in Italy on an extensive Grand Tour, between 1700 and 1705. Apparently the duke had already decided to build in 1700, before he left for Italy, because of his failure to buy Cornbury Park near Charlbury, Oxfordshire.[2] Cornbury was a regular classical house designed by Inigo Jones' mason, Nicholas Stone, which had been brought up to date for the Earl of Clarendon more recently by Hugh May; Shrewsbury's disappointment evinces the enthusiasm for classical architecture that he had acquired before he left for Europe. Modern architecture in Italy had evolved into its Baroque form, a style quite unknown in Britain. The travelling duke was quickly won over: in Rome, Shrewsbury visited the villa of Domenico de' Rossi in 1702, to "lay aside some prints" by the architectural engraver of the Studio di architettura civile di Roma, full of designs by Borromini and Bernini.[3] In 1704 Shrewsbury obtained a plan for a house from Paolo Falconieri.[4] On his return to England, apparently possessing at least Rossi's first volume (of 1702), Shrewsbury called upon Archer to create a modern Italian palazzo set in the Oxfordshire countryside. At this time, Archer was one of the few British architects to have studied in Italy and become conversant with the Baroque forms of architecture,[1] but many of the details of Heythrop[5] were adapted from Roman precedents through engravings in Rossi's publication, though none was directly imitated.[3][6]

Work on the house began in 1706. By 1709 the roof was in place and by 1713 the house was ready for partial occupation, but John Vanbrugh noted in April 1716 that it was incomplete,[6] and so it was still, on Shrewsbury's death in 1718. The building contractors were William and Francis Smith of Warwick.[3][7] The stone used is a Middle Jurassic freestone, apparently Chipping Norton Limestone from local quarries.[8]

Archer's design was, as requested, in the Italian Baroque style. On the entrance facade of eleven bays, the giant order with a level balustraded roof is very similar to the design which William Talman had executed for the Duke of Devonshire at Chatsworth House just few years earlier.[9] Archer's Corinthian order shifts restlessly against the wall plane, varying on the entrance front from flat pilasters to attached columns, to a free-standing screen that marches across the recessed entrance bays. The wall plane is ashlar on the entrance front but with strictly conventionalized channeled rustication the full height of the garden front. On the side elevations, the channeled rustication appears only on the rusticated pilaster-like corner quoins of the lightly projecting five central bays. In the frieze under the main cornice, occasional discreet square openings give light to the low attics.

The inspiration for the Baroque facade at Heythrop was Gian Lorenzo Bernini's final design for the Louvre, a plan never executed. Like Chatsworth, Heythrop Park comprises two floors linked by the giant order standing upon a raised semi-basement; the bays are articulated by a giant order with the Baroque inturned Corinthian volutes invented by Francesco Borromini. The elevation is broken by three projections, the centre being the central portico with Corinthian columns; this has no pediment to break the roof-line. In a break from his usual style, Archer has given the fenestration unusual emphasis by contrasting architectural detailing: the windows on the ground floor are from a design by Bernini, while those on the floor above are in a mannerist style with overlarge keystones penetrating the cornice,[10] as at Talman's Chatsworth. The central nine bays of the 13-bay garden front carry the rustication of the half-basement right up the wall to the cornice, with perfectly plain window openings and a central door framed in a very sober Doric order; this severe front is relieved by its richly treated two-bay end pavilions, which take up all the rich motifs of the entrance front.

The fire and afterwards

In 1831 a fire swept through the house destroying the interiors,[1] many designed by James Gibbs, including a quatrefoil hall, a feature believed to have been unique in Britain. Other features of the rooms included a saloon which had an entablature supported by life-sized statues of Ceres and Flora beneath a stuccoed ceiling depicting the four corners of the globe.[1] Mrs. Philip Lybbe Powys, who visited Heythrop in 1778 remarked that the stucco work was by "the famous Roberts of Oxford", though the plasterer Thomas Roberts was born in 1711;[11] "In the arches over the doorways", Mrs. Lybbe Powys noted "fables of Aesop, finely executed in stucco, with wreathes of vine leaves."

After the fire the house remained derelict until sold to the railway contractor Thomas Brassey in 1870 as a wedding present for his third son Albert Brassey (1840–1918).[12][13] 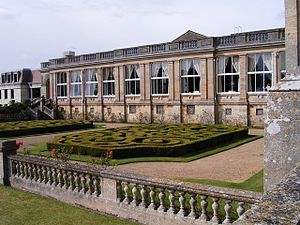 The Brassey family rebuilt Heythrop Park from 1871. The eminent architect Alfred Waterhouse was commissioned to rebuild the interior. Waterhouse, a noted Gothic Revival architect, in deference to the history of the house worked in a neo-classical style; his double-height arcaded hall, being more redolent of the Baroque of John Vanbrugh than Archer. However, Waterhouse did add Gothic motifs to the hall's clerestory in the form of stained glass windows, by Morris and Co, depicting Faith, Hope and Charity.[14]

The house remained in the Brasseys' ownership until 1926. From then until 1969, Heythrop Hall was a college for the philosophical and theological studies of Jesuit scholastics. During this period the house was altered and enlarged, not always in a style sympathetic to the original architectural concept. In 1926 two wings were added to the north front built of Hornton ironstone from northern Oxfordshire.[8] Like Chipping Norton Limestone it is a Middle Jurassic limestone, but its higher ironstone makes it much darker and browner than the stone used to build the house in the 18th century.

In 1952, the indoor tennis court was converted to a chapel and in 1965, a library was added. In 1960, the architectural firm of Howell, Killick and Amis created two halls of residence in the grounds in a contemporary style.[14]

When in 1969 the Jesuit college moved to London as part of the University there, the National Westminster Bank group bought Heythrop Park and turned the house and its precincts into a training and conference centre. In 1999 NatWest sold the house to Firoz Kassam's company Firoka Ltd, which has turned the house and grounds to a hotel and country club.

Heythrop Park Hotel Golf & Country Club is a hotel with conference facilities and a golf course. The house has seventeen bedrooms and reception rooms and the restored and enlarged outbuildings and halls of residence contain a further 270 bedrooms.[15]

The hotel and associated buildings are part way through a programme to refurbish them to make a conference centre and 2 hotels. The mid-20th Century lecture halls, which were demolished, had little to recommend them. The replacement building, now a Crowne Plaza franchise is in a similar architectural vogue. However, the development of the golf course and the main buildings has had an adverse effect on the condition of the gardens and relict features of the Talbot and Brassey era, with the consequent loss of rare and interesting trees across the estate. The gardens used to be quite special. Of particular note is the wide use of pulhamite in the Victorian hard landscaping, as found at Batsford Arboretum and elsewhere.

English Heritage (now Historic England) has had much input into preserving what remains of the ferme ornée but its ability to monitor the detail and enforce the small points of planning requirements seems limited.