Halberton is a village in the east of Devon, siting between the historic market towns of Tiverton and Cullompton. The Grand Western Canal runs through the village.

The parish is large, with an area of about 7,520 acres[1] and it is surrounded, clockwise from the north, by the parishes of Uplowman, Sampford Peverell, Burlescombe, Uffculme, Willand, Cullompton, Butterleigh, Silverton, Bickleigh and Tiverton.[2]

The name 'Halberton' is understood to be derived from '‘Haligbeort’', the name of a Saxon chief of ancient days. It also lends its name to the Halberton Hundred, which includes the parishes of Halberton, Sampford Peverell and Willand, as well as parts of Uplowman and Burlescombe. Many of the farms date back to the days of the Domesday Book or shortly thereafter, and Halberton is still largely a farming community.

Halberton village is divided into two parts, Higher Town and Lower Town, separated by the mill stream and pond. The pond is fed by warm springs and never freezes.

The Great Western Railway once had a branch line running through Halberton to Tiverton, but this has now gone. However, the Grand Western Canal still runs through the village and this is now a country park. It is eleven miles long running from Tiverton to Loudwells.

Rock Bridge was constructed to carry the road (formerly the A373) over the canal.[3] The same engineers who built the canal also built a substantial country house, Rock House,[4] turnpike house[5] and cottages[6] at the site. Several other bridges were also built at Halberton to carry minor roads over the canal, including Baten's Bridge[7] an accommodation bridge,[8] the Cornwallis Bridge,[9]the Greenway Bridge,[10], the Sellick Bridge[11] and others.[12]

There are several old houses in the village, the most notable being ‘The Priory’, believed to date from the 14th century, when it was part of a college called St Jude’s. This was occupied by monks of the order of St. Augustine. The building known to be the oldest is the Mill House, which was registered in the doomsday book (1086) as town mills. Townsend House (now demolished) dated from the early 18th century, and several other houses in the village date from the 17th and 18th centuries. 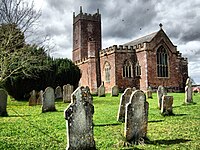 The parish church dates from the 14th century and stands at the centre of the village. It is thought to have been built on the site of an earlier, Saxon church.

The Grand Western Canal at Halberton