The Gwili Railway is a heritage railway that operates a standard-gauge preserved railway on a line 4½ miles long in Carmarthenshire from the site of Abergwili Junction (near Carmarthen) along a short section of the former Carmarthen to Aberystwyth line. The original railway closed in 1965, with the track being lifted in 1975.

The Manchester and Milford Railway made a junction with the CCR at Pencader, making a through route to Lampeter which, in turn, later extended to Aberystwyth. In 1872, the line became the last in Wales to be converted from Brunel's broad gauge, 7 feet ¼ inches, to standard gauge.

In its early days, the line throve by serving the local farming and wool industries though, in the years following the First World War, this traffic gradually declined. The Second World War brought another lease of life as a relief route carrying heavy ammunition trains between South and North Wales.

Between the wars, the Great Western Railway sought to encourage traffic, opened several new halts along the route and provided camping coaches at several stations.

The route earned a reputation as a meandering rural branch; where trains trundled along, often flagged down by market-bound farmers' wives making their way across the fields to board the carriages. In fact, nearly three hours was permitted for the 56 mile journey between Carmarthen and Aberystwyth.

In the post-war years, closure of the spurs off the main line began. The Branches to Aberaeron and Newcastle Emlyn closed in 1952 which left only the route between Carmarthen and Aberystwyth open to traffic. The line enjoyed a brief resurgence in the 1950s, when the Royal Train traversed the route and other new traffic included Butlins through-specials taking holidaymakers to the new camp in Pwllheli.

However, declining passenger figures meant that the Beeching Axe was inevitable. In the end however, it was nature that struck the first blow. Heavy flooding severed the line six miles from Aberystwyth in December 1964, on the same weekend that storms that caused the Ruabon to Barmouth Line to suffer a similar washout. The last passenger train ran along the truncated route on 22 February 1965. Freight traffic, mainly milk borne between Carmarthen and Lampeter, survived until 1973. The track was left in place until the summer of 1975.

Two years after its closure, the Gwili Railway Preservation Company was formed with the ambition to preserve at least a figure eight miles of track of the former route, from Abergwili Junction right up the Gwili Valley to the station site at Llanpumpsaint.[1]

Track lifting had already started by the time of the formation of the new Company and, as a result, only a mile of track north of Bronwydd Arms was left in situ, the Company being able to acquire the full eight-mile stretch of trackbed from Abergwili Junction to Llanpumsaint for both rebuilding and preserving. Over time, the Railway has extended the operational length from one mile to 2½ miles, as well as reconstructing original features at Bronwydd Arms station and amassing a collection of locomotives and rolling stock.

The Gwili Railway was set up in 1974 and incorporated the next year. By 1978 the railway had purchased at least eight miles of track (between the sites of Abergwili Junction and Llanpumpsint railway station) and was running an initial steam-hauled service on a one-mile section.

In Spring 1978, it re-opened the one-mile section of the Carmarthen-Newcastle Emlyn route from its base at Bronwydd Arms, three miles north of Carmarthen, making it the first standard-gauge preserved railway to operate in Wales.

The railway was working south towards Carmarthen to a new station site to be called "Abergwili Junction" built on the northern outskirts of Carmarthen, at the site of the old and former Abergwili junction.

Trains on the Gwili start from Bronwydd Arms where the replica GWR station is dominated by a Signal Box saved from Llandybie railway station on the Heart of Wales Line. The Signal box, which is open to the public, was built in 1885 and has been restored to operate signalling within the station area.

Typical features on the line include the gradients such as the 1 in 60 on the bank immediately north of Bronwydd Arms, the meandering River Gwili and the A484 road which are never far away and the wooded forests and sharp curves as the railway twists its way through the valley.

From Bronwydd, the line climbs between rural hills and meadows alongside the river River Gwili past the site of the first terminus of the newly opened Gwili Railway next to the old mill at Cwmdwyfran. From here, the line continues climbing until it passes under a rusticated brick bridge at the second terminus at Penybont station.

The line carries over a redecked bridge crossing the River Gwili. This expansion was achieved in time for its 10th anniversary celebrations in 1988. At the same time, the new terminus, Llwyfan Cerrig, was opened to the public.

In 2001, a further half mile extension built by volunteer labour was opened to a new halt at Danycoed.

Llwyfan Cerrig ("Stone Platform") was a former quarrymen's halt and the Gwili has created a nature trail which winds through the old quarry and emerges above the stock sheds. The station building, which originally stood at Felin Fach on the Aberaeron branch and dates from 1911, was dismantled by volunteers and re-erected in the early 1990s. It has been restored and furnished to an authentic 1950s style.

From the platform, a path leads to a picnic area on the bank of the Gwili River where kingfishers and heron can sometimes be glimpsed. A miniature railway runs from this station and refreshments can be bought.

From Llwyfan Cerrig, the line runs uphill for another three-quarters of a mile with the River Gwili on one side and a rock face on the other, until it reaches the present end of the line at Danycoed ("Under the wood") where a typical GWR rural halt has been recreated.

Operationally, the railway is normally run on a 'one engine in steam' basis although the facility exists to pass trains at Llwyfan Cerrig at busy periods such as Day Out With Thomas events. In recent years, the Railway has expanded the portfolio of events on offer with Dining Trains, Driver Experience days and Jazz and other themed nights now being part of the annual timetable.

Restoring the line northwards has proven to be more difficult than initially anticipated, volunteers' high hopes of reaching Llanpumsaint constantly being hindered by the number of bridges en route. There are a total of eight bridges to overcome, all of which are in poor condition and need refurbishment to be worthy for rail traffic once more. There were previously several attempts back in the late 1980s and early 90's to extend the railway to the disused Cynwyl Elfed station site.

With the southern extension of the Gwili Railway to Abergwili Junction nearing completion and opening in Spring 2016, this will bring the line up to a total of around 4½ miles in length.

The railway bridge that once carried the line over the River Towy was removed.[2]

The closure of the former (now defunct) Swansea Vale Railway in 2007 resulted in a merger of that society with the Gwili. This has provided a boost to the southern extension with track materials, a footbridge, water tanks/cranes and signalling equipment from Swansea now earmarked for use on the extension.

In 2011, over a mile of track was laid on the extension and work is ongoing to improve signalling and the level crossing at Bronwydd Arms for future passenger operation. Since then the track has extended all the way down and into Abergwili Junction station itself. 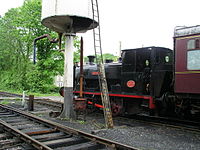 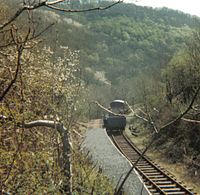 The Gwili Railway has a collection of vintage coaches from various railway operators and companies.