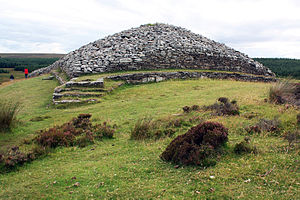 The Grey Cairns of Camster are two large Neolithic chambered cairns in Caithness, located eight and a half miles south of Watten and five miles north of Lybster. They are among the oldest buildings in the northern counties, dating to about 5,000 years ago. The cairns demonstrate the complexity of Neolithic architecture, with central burial chambers accessed through narrow passages from the outside. They were excavated and restored by Historic Scotland in the late 20th century and are opened to the public.

The cairns, which are considered to be examples of the Orkney-Cromarty type of chambered cairn, were constructed in the third or fourth millennium BC in a desolate stretch of boggy peat-covered moorland in the Flow Country of Caithness. They consist of two structures standing 200 yards apart, known as Camster Round and Camster Long. A third cairn, located about 150 yards away from Camster Round, is not considered to be part of the grouping.[1] The cairns are located just to the west of a minor road built in the 19th century to link Watten and Lybster. Camster Burn runs in a north-south direction about 100 yards west of the cairns, while the Loch of Camster is located a short distance to the east.[2] Although the surrounding countryside is now inhospitable and sparsely inhabited, during the Stone Age it was fertile farming land and only became covered in peat during the Bronze Age.[3] 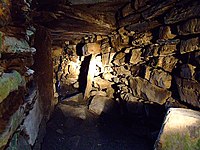 Camster Long is a cairn 196.9 ft (60.0 m) long with "horns" at each end, aligned in a NE-SW direction. It is twice as wide at one end than the other; the width of the horns differs from 65.6 ft (20.0 m) at the north-east end to 33 feet at the south-west end. It reaches a maximum height of 15 feet at over its two burial chambers about 49 feet apart, which are respectively situated about two-thirds of the way along the cairn (starting at the south-west end) and adjoining the north-east end.[4] The two chambers appear to have originally been constructed within separate round cairns, which were only later incorporated into a single long cairn for unknown reasons.[3]

The chambers are both entered via passages leading from the south-east side of the cairn. The west chamber consists of two compartments, each delineated by upright portal stones standing 6.6 ft (2.0 m) high. The first compartment has a maximum width of 3.3 ft (1.0 m), while the second is six feet by five feet. When the tomb was excavated, both compartments were found to contain human bones mingled with broken and unburnt animal bones from horses, oxen, pigs and deer.[4]

The entrance to the east chamber is located 30 feet from the north-east end of the cairn and consists of a passage 2.0 feet (0.6 m) high by 24.6 ft (7.5 m) long. The first 16.4 ft (5.0 m) is straight and mostly intact, though the inner end is roofless and broken down. At the point where it reaches the chamber, the passageway turns through 45° through a portal made from two upright slabs. The chamber is in the shape of an irregular pentagon six feet in diameter, rising to a roof closed by a single square stone set six feet above the floor. There may be a third as yet undiscovered chamber at the south-west end, suggested by the presence of exposed upright stones which may indicate the presence of a portal.[4]

Camster Round is, as the name suggests, a circular cairn; it measures 20 yards in diameter by 12 feet high.[1] Its form may be similar to that of the original separate round cairns that were later amalgamated into Camster Long.[3] It is virtually intact with a high vaulted chamber at its centre, accessed from a passage 20 feet long and 3 feet high at the east-south-east side of the cairn. The passage appears to have been deliberately put out of use by blocking it up with stones piled up to the height of its roof. When it was excavated, archaeologists found that the floor of the cairn was composed of a foot-deep layer of black earth, ash and burnt bones. It appears that bodies were placed there in a sitting position, though, oddly, without leg bones; the legs appear either to have been removed or to have rotted off before the bodies were deposited in the cairn.[1]

The first archaeological investigations of the cairns was carried out between 1865–6 by Joseph Anderson and Robert Shearer, who investigated a total of seven chambered tombs in Caithness including the two at Camster.[5] The Camster Round Cairn was investigated in 1865, followed by the Camster Long Cairn in 1866.[6]

Between 1966-1968, limited studies were carried out by P.R. Ritchie, where some debris was removed and preparatory work was done for the purpose of conservation. Large-scale studies were subsequently carried out between 1971–3 by John Corcoran. However, his illness and death during the excavations meant that the results of his work were not published.[7] Lionel Masters took up the task of completing the excavation and carrying out archaeological research and conservation between 1976–80. The task of consolidating and restoring the cairns was finally concluded in 1981.[8]