Great Tew is a village in the Cotswold Hills in Oxfordshire, renowned for its beauty. The village is to be found aboutr five miles northeast of Chipping Norton and 8 miles southwest of Banbury. It is a small place: just 156 villagers were recorded in the 2011 census.

The name of the village is from Old English. It was in Anglo-Saxon days Cyrictiwa, which means "Church Tew", distinguishing the village from neighbouring Little Tew which lacked its own church. The name "Tew" is not explained.

The parish churches St Michael and all Angels was originally Norman, and the south doorway from about 1170 survives from that period. St Michael's was rebuilt in the 13th century, and the arcades of stone pillars inside the building and the south porch survive from this period. Early in the 14th century the aisles were enlarged and most of the present windows were installed. The bell tower was built late in the 14th century and its style is transitional between the Decorated Gothic and Perpendicular Gothic. Next the Perpendicular Gothic clerestory was added. The architect Thomas Rickman repaired St Michael's and restored its chancel in 1826–27.[1]

In the chancel is a monument to Mary Anne Boulton (died 1834) that includes a reclining female figure sculpted in white marble by Francis Chantrey.[2]

The church is a Grade I listed building.[3]

Evidence that the area has been inhabited since at least the Bronze Age includes a barrow about a mile south of the village.

Excavations of the site of a Roman villa a mile and a half southeast of the village at Beaconsfield Farm revealed a hypocaust and mosaic floors,[4] pottery dated to the 3rd and 4th centuries AD[5] and evidence that occupation of the site may have begun early in the 2nd century AD.[5]

In the tenth century we learn that Ælfric of Abingdon held the manor of Great Tew by 990. Ælfric later became Archbishop of Canterbury in 995. Ælfric died in 1005, leaving Great Tew to St Alban's Abbey.[4] In 1049–52 the abbey leased Great Tew:

Leofstan, abbot, and St Albans Abbey, to Tova, widow of Wihtric, in return for 3 marks of gold and an annual render of honey; lease, for her lifetime and that of her son, Godwine, of land at Cyrictiwa, with reversion to St Albans.[6]

William the Conqueror granted the manor to his step-brother Odo, Bishop of Bayeux, and it was recorded amongst Odo's estates in the Domesday Book in 1086.[7]

The living of the parish church was granted to the Benedictine Abbey at Godstow in 1302 and remained under its control until the abbey was suppressed in the Dissolution of the Monasteries in 1539.

Tew Great Park was created before the latter part of the 16th century.

Sir Lawrence Tanfield, Lord Chief Baron of the Exchequer, bought Great Tew estate in 1611 from Edward Rainsford. He deprived the villagers of timber, causing some of the cottages to fall into disrepair. Tanfield inclosed part of Great Tew's lands in 1622. However, most of the parish's common lands were not enclosed until Parliament passed an Enclosure Act for Great Tew in 1767. 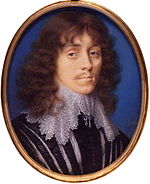 After Tanfield died in 1626, followed by his wife Elizabeth in 1629, Great Tew passed to his young son-in-law Lucius Cary, 2nd Viscount Falkland.[4] In the 1630s Lucius gathered together the Great Tew circle of writers and scholars, including Abraham Cowley, Ben Jonson and Edmund Waller.[2] During the Civil War the young Viscount fought on the Royalist side and was killed in 1643 at the First Battle of Newbury. Great Tew remained in the Cary family until the death of Anthony Cary, 5th Viscount of Falkland in 1694.[4]

In 1780 and 1793 Great Tew estate was bought by George Stratton, who had made a fortune in the East India Company. He died in March 1800 and was succeeded by his son George Frederick Stratton. The manor house had evidently fallen into disrepair, as the Strattons lived in a smaller Georgian dower house slightly to the south of it and had the manor house demolished in about 1803. In 1808 George Frederick Stratton engaged the Scots botanist and garden designer John Loudon, who laid out north and south drives in Great Tew Park and planted ornamental trees in and around the village, which today enhance its picturesque appearance.[4] 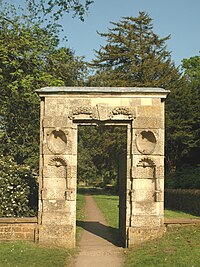 In 1815–16 Matthew Robinson Boulton, the son of the manufacturer Matthew Boulton of Birmingham, bought Great Tew Estate. In 1834 Boulton added a Gothic Revival library to the east end of the house, and in 1856 the Boulton family had a large Tudor style section designed by F S Waller added to the west end.[8][9] Great Tew remained with the Boulton family until M E Boulton died without heirs in 1914.[4] As of 2014 the house is largely unoccupied and clad in scaffolding and plastic sheeting. It is a restoration project for the estate owners, the Johnston family.[10]

Great Tew is recorded as having two watermills by the 13th century, and both were still in use when the estate was surveyed in 1778.[4] Mill Lane, about 600 yards north of the village, is named after a mill that was built or rebuilt in the 17th century for wool processing.[11] Traces of its mill pond, mill stream and wheel chamber were still visible in the early 1980s.[11] Further north, a mile from the village, there was a mill on the stream near Cottenham Farm.[11] Traces of its mill ponds, buildings and two waterwheels were still visible in the early 1980s,[11] and a small wood there is still called Pool Spinney. One mill had ceased being used by the time G.F. Stratton sold the estate in 1815; the other was disused by 1837.[4]

One of J.C. Loudon's works for G.F. Stratton after 1808 was an elaborate watermill at Tracey Farm in the south of the parish.[12] It was a bone mill producing bonemeal fertiliser after the Agricultural Revolution.[12] The stream at Tracey Farm was dammed in a mill pond, and both the leat feeding the waterwheel and the tail race downstream of it were in brick-lined tunnels, the latter 20 feet below ground.[12] Whereas most Oxfordshire watermills have an undershot or a breastshot wheel, Loudon adopted a more efficient backshot wheel.[12] It was made of wood and iron and was 16 feet in diameter.[12]

A sawmill powered by a beam engine was built in the middle of the 19th century. The beam engine is no longer there but the engine house and its tall chimney survive. 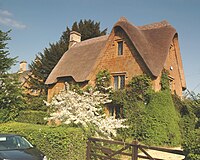 One of the thatched cottages in Brook Road

Many of the homes in the village seem to have been built in the 17th century, during the 'Great Rebuilding of England'.[13] Given the Tanfields' behaviour towards the villagers, they are more likely to have been built during the decades when the Cary family had the estate. Every cottage and house is built from the local ironstone from Great Tew's own quarry, and most have thatched roofs.

Matthew Robinson Boulton had most of the village's old cottages and houses rebuilt and embellished from 1819 onwards.

After M.E. Boulton's death in 1914 Great Tew estate was held in public trusteeship for nearly fifty years, during which time many of its historic cottages and houses were unoccupied and allowed to become derelict. In 1962 Major Eustace Robb inherited the estate and declared he would restore its prosperity and buildings.[14] However, a decade later many cottages were continuing to decay and Jennifer Sherwood and Sir Nikolaus Pevsner condemned their deterioration as:

one of the most depressing sights in the whole county. Terraces of cottages lie derelict (1972) and will soon be beyond hope of restoration. A scheme of gradual rehabilitation is said to be in progress, but nothing has been done meanwhile to prevent the decay of unused cottages, some of which are completely ruinous and will need to be entirely rebuilt.[15]

In 1978 another academic authority described Major Robb's treatment of Great Tew as a "notorious example" that had "demonstrated that a singleminded or neglectful owner can still cause both the community and the village fabric to die".[16] Also in 1978, Great Tew village was declared a conservation area. In 1985 Major Robb died, leaving Great Tew estate to the Johnston family. The Johnstons have worked to restore the village and in 2000 reopened Great Tew's historic quarry to supply ironstone for building.[17]

The position of the village now is of remarkable contrast to the observations of the past: no longer considered decayed, Great Tew is frequently described as the prettiest village in the land.

Many of the cottages are Grade II listed buildings. One pair of 17th-century cottages, 57 and 58 The Lane, are Grade II* listed.[18] 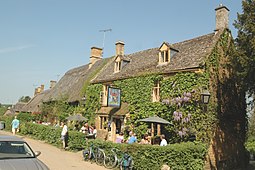 The Falkland Arms is mostly a late 17th century building, in part possibly earlier.[19] It acquired its current name by 1830.[4]

Great Tew has a village shop which is also a small café. It was formerly the post office. The Tew Centre,[20] between the village and Little Tew, also has a café