Great Ouseburn is a village in the West Riding of Yorkshire, four miles south-east of Boroughbridge. The village of Aldwark is to the north-east in the adjacent North Riding. Great Ouseburn had a recorded population of 598 at the 2011 census.

Great Ouseburn and Little Ouseburn both take their name from the river Ouse which begins in the garden of the Great Ouseburn Workhouse.[1] The original source of the Ouse (which is some 40 yards away from where it flows now) is marked by a stone column reading "OUSE RIVER HEAD... OUSEGILL SPRING Ft. YORK 13miles BOROUGHBRIDGE 4miles".[2] The meadows by Ouse Gill Beck have since become a Site of Interest to Nature Conservation (SINC).[3] 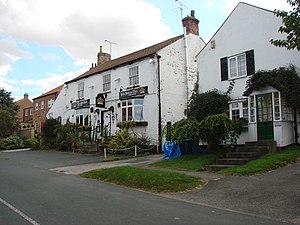 Great Ouseburn was originally part of the district of Knaresborough, which was a royal forest in William the Conqueror's time, giving Great Ouseburn the status of a "Forest Liberty Town"; it had the liberty to punish those people who misbehaved within its boundaries. in the Domesday survey the village is referred to as "Useburne".[4]

The estate, now known as Kirby Hall, was a major influence on the village and was owned by William de Kirkeby in 1200. The estate owned most of the village and the economy of Ouseburn was principally centred on the estate's agricultural business. In 1912 most of the smallholdings were sold to the tenants.

In 1854 Great Ouseburn Community Primary School was established with the laying of the foundation stone by Sir Henry Mesey-Thompson of Kirby Hall and the then Bishop of Ripon.[6]

An important aeroplane crash during the Second World War occurred in Great Ouseburn on the 30th of April, 1942. "De Havilland Flamingo R2764 of 24 Squadron crashed at Great Ouseburn in Yorkshire on 30 April 1942." The plane was carrying two Air Ministry Staff and four high ranking Russians. That morning the plane had travelled from RAF Hendon in London to RAF Tealing near Dundee. It was returning after a short stop at RAF East Fortune near Edinburgh when it developed engine trouble. The plane then caught fire and crashed to the ground in the field just behind Vine House. The Great Ouseburn Fire and Rescue where quickly on the scene, the fire was contained but there were no survivors.[8] 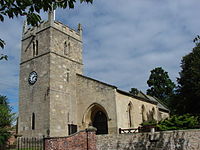 St Mary's Church is the focal point of the village. The church has a Norman tower with a thirteenth century belfry, fourteenth century arcades, a 3-bay aisled nave rebuilt in 1820 and a fifteenth century chancel. The south chapel was constructed in 1883.[10]

Great Ouseburn was designated a conservation area in 1994, the boundary of which roughly runs from the southern end of the village either side of Main Street up to the village Green.[11]

Great Ouseburn Playing Field on Lightmire Lane has been enrolled as a Queen Elizabeth II Field.