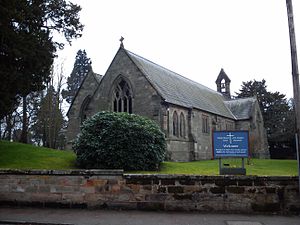 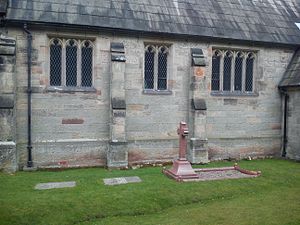 Great Haywood is a village in central Staffordshire, just off the A51 road and about four miles north-west of Rugeley.

Haywood lies on the River Trent, where the Trent is met by its tributary, the River Sow. The village is also the site of a significant junction of the canal network, Haywood Junction, where the Staffordshire and Worcestershire Canal meets the Trent and Mersey Canal. The waters around the village are widely regarded by guidebooks as some of the most attractive on the network.[1]

St Stephen's Church was designed by Thomas Trubshaw, and became the centre of a parish in 1854. The 2nd, 3rd and 4th Earl of Lichfield and other members of the Anson family of Shugborough Hall are buried in the churchyard of St Stephen's.[2]

St John the Baptist's Catholic church was originally built in Tixall, about three miles away, as a private chapel to Tixall Hall, which was owned by the Aston family. When the estate was sold to Earl Talbot, the church was dismantled and rebuilt with a few alterations in Great Haywood.[3] The marks made on the blocks to allow reassembly can still be seen inside the church.

There was originally a mill and a brewery in the village, but both have been closed down and demolished, commemorated by the names of the roads where they once stood (Mill Lane and Brewery Lane). Following a fatal automobile accident in 1905, the mill pond was drained and the road straightened.

The Stone to Colwich railway line passes through Great Haywood, and the village was served by a railway station which was opened by the North Staffordshire Railway on 6 June 1887 and closed in 1957.

In August 2002 advertisements were placed in the national press for a "hermit" to take up residence on the Great Haywood Cliffs above the nearby Shugborough estate, ancestral home of Lord Lichfield.[4] Fifty-five people applied, and Ansuman Biswas was chosen as hermit. Shugborough also serves as the headquarters of Staffordshire's arts management team.

Great Haywood is the site of Essex Bridge, one of the largest surviving packhorse bridges in the country which stands over the River Trent near Shugborough Hall. It borders Cannock Chase, designated an area of outstanding natural beauty since 1958.