Great Gransden is a village and parish in the south of Huntingdonshire. It is a fair-sized village for the area; in 2001, the population of the parish was 969 people. It is right by the border with neighbouring Cambridgeshire; its twin village, Little Gransden, lies in that county.

Great Gransden was first mentioned in AD 973 when the land of Grantedene was granted in gift to Thorney Abbey by Aethelwold, Bishop of Winchester. It is now a residential village set in a wooded hollow in the south-east corner of the county.

Its older centre is quite charming with period cottages grouped around the church which is dated from the 15th Century although its tower dates from about 1390. Features of note include a pulpit of 1600 and a rare clock whose chiming mechanism is said to date from 1683. In addition there is a windmill, said to be the oldest post mill in England.

Great Gransden parish is 10 miles south-east of the county town, Huntingdon. The whole parish is broad and covers an area of 3,402 acres.[1] The village stands on the B1046 road between Abbotsley, to the west, and Longstowe, to the east. Minor roads run south-west to Waresley and north-east to Caxton.

This part of Huntingdonshire is in the small hills which beautify the south of the county; the land in the parish ranges from 108 feet, near its border with Abbotsley parish, to 246 feet above sea level on the disused airfield. The subsoil is Ampthill clay with Lower Greensand. 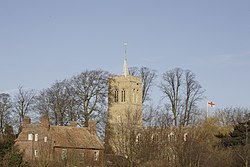 The Grade-I-listed[2] parish church, dedicated to Saint Bartholomew, has a chancel with a 19th Century organ chamber, a vestry on the north side, nave, north aisle, south aisle, west tower and north and south porches.

The church, or rather its predecessor, was mentioned in the Domesday Book of 1086 but no remains from this time exist now.

The tower was built in the late 14th century, but the whole church was rebuilt in the 15th century. The organ chamber and vestry were built, and the north porch entirely rebuilt in 1873.[1] A pulpit dating to 1600 and a rare clock whose chiming mechanism is said to date from 1683 are notable artefacts in the church.[3]

The village's name is derived from "Granta's valley". The name appears as Grantandene in 973 and Grante(s)dene in the 1086 Domesday Book.[4]

Great Gransden's earliest surviving appearance in the written record is in 973 when its land was endowed to Thorney Abbey by Aethelwold, Bishop of Winchester. Its older centre is made up of cottages grouped around the 16th century church, although its tower dates from about 1390.

The continuing connection between the village and Clare College, Cambridge appears to date back to 1346, when the advowson for Great Gransden church was part of the original endowment of the college.[3][5]

Barnabas Oley was first instituted to the vicarage in 1633. He was a Fellow of Clare College and editor of George Herbert's works. During the English Civil War, he was one of the university's most active Royalists. He was expelled from his fellowship and lodgings in 1644, but at the Restoration of King Charles II in 1660 they were restored to him. From 1664 Oley lived mainly at Great Gransden and left many benefactions.[1] He founded the village school in 1670 and it is named after him.[6]

Barnabas Oley's life is celebrated every year on the school's Founder's Day, held in the parish church. Children leaving the school are presented with an 'Oley Bible' by a Fellow of Clare College.[7]

Great Gransden has the oldest post mill in Britain.[8][9] It was constructed around 1612 and has two storeys, with a flour dressing machine, inscribed 1774, on the second floor.

The mill last worked around 1890, and was given to Huntingdonshire County Council in 1950.[10] In 1957 the post mill was classisfied as an ancient monument, following this, a restoration project was completed in 1984.[11] The mill still possesses the internal workings and retains its sails. It is available to view internally by arrangement.[12]

There are 54 listed buildings in Great Gransden parish, including the remains of a churchyard cross, houses, barns and the post mill.[13] The brick vicarage, north-west of the church, was built by Barnabas Oley, probably between 1660 and 1685.[1]

A lychgate was built in the churchyard in 1920 to commemorate Great Gransden men who died in First World War.[14]

Gransden and District Agricultural Society Annual Show has been held every year since 1891, with the exception of the years during Second World War. It is held on the last Saturday of September and is one of the few remaining shows of its type still running in England.[15]

Great Gransden has one pub, The Crown and Cushion. It also has a lawn tennis club, bowls club and a football team called the Gransden Chequers. Ironically, the Chequers is a pub based in Little Gransden, but the team plays its home matches in Great Gransden.