Abbotsley is a small village in Huntingdonshire, three miles from the county's largest town, St Neots. The 2001 census put its population at 425 people, living in 164 households.

The village stands on the B1046 road from Great Gransden to St Neots. Its main thoroughfare is the High Street, fringed with a mixture of houses bearing witness to past and present. It contains 17th century thatched cottages, farm houses, 18th Century brick buildings, the old village school (now serving as the village hall) and attractive pubs

The village green is at the heart of the village, and here an annual feast is held.

It is a Grade II* listed building.[2] Abbotsley is part of the deanery of St Neots and the Diocese of Ely.[3]

The church tower has four Kings instead of pinnacles, and is perched high above the Green, reassuring the village.

The village's name is said to be derived not from "Abbot's lea" ("clearing") as expected by from "Ealdbeald's clearing".[4] Eadbeald is not otherwise known. The village is not listed in the Domesday Book and some historians put its foundation during the 12th century,[5] which shed doubt on the origin of the name.

A war memorial which stands in the churchyard commemorates Abbotsley men who died in the First and Second World Wars.[6]

19 buildings in Abbotsley are listed, including the church. Among them are four houses along Blacksmiths Lane, nine houses along the High Street, a red telephone box[7] and a table tomb in the churchyard.[8] 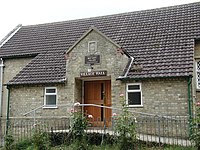 A village hall is used for meetings, events and private functions.

An annual Feast Week and Scarecrow Festival is held to raise money for maintenance of the village hall. Residents construct themed scarecrows and place them outside their houses for a week while there are various fundraising events held.