Great Cockup is a fell in the Northern Fells of Cumberland, within the Lake District. It is one of the four Uldale Fells, along with Longlands Fell, Great Sca Fell and Meal Fell.

Great Cockup reaches a height of 1,726 feet and merits a chapter in Alfred Wainwright's Pictorial Guide to the Lakeland Fells who describes the fell as functional rather than ornamental, writing:

The fell is known as "Great" to distinguish it from its smaller neighbour, Little Cockup, which lies on its north-western shoulder overlooking the hamlet of Orthwaite with a height of 1,296 feet.

The fell's name comes from the Old English language: cocc hop, where hop means a secluded valley, thus "cock valley". The cock may be the woodcock. The fell's name quite often causes mirth because of its value as a double-entendre. The fell was visited by British television personality Denis Norden for one edition of his TV show It'll be Alright on the Night, a programme which consists of out-takes from film and television which he calls "Cockups". The programme, Alright on the Night's Cockup Trip, was broadcast in 1996.

The fell's unusual name has also been adopted for a local beer brewed by the Hesket Newmarket Brewery, called "Great Cockup Porter" a dark coloured stout with an ABV of 3.3%.

After the disastrous handling of the 2001 foot-and-mouth crisis (which has had a disproportionate effect in the Lakeland shires), Chris Brasher suggested that a memorial stone to the Department of Agriculture could appropriately be erected on Great Cockup.

Topography and Land Use 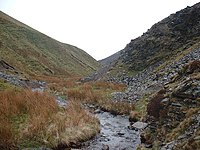 The fell has a series of stone built grouse butts 500 yards west of the summit, some of which have been dismantled leaving just the foundations in the ground and can be confusing to walkers as to their original purpose. The lower southern slopes of the fell has a large, isolated boulder which is marked on large scale maps, this is thought to be an erratic left by a retreating glacier. The fell has also yielded some rare fossils with unusual forms of dendroid graptolites being found on the slopes.

Great Cockup is almost always ascended from the hamlet of Orthwaite following the bridleway up Hause Gill for a mile and a half and then leaving it and ascending Great Cockup's steep southern slopes to the summit. A direct ascent over Little Cockup is possible but the bracken can be thick at certain times of the year. Great Cockup is linked to Meal Fell, a mile to the east, by the pass of Trusmadoor.

The view from the summit is dominated by a good view of Skiddaw's northern slopes while there is an excellent open outlook towards Dumfriesshire.