Dyrham Park is a baroque mansion in an ancient deer park by the village of Dyrham in Gloucestershire. It is today owned by the National Trust. 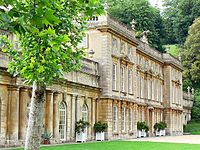 The house is set in 274 acres of gardens and parkland. The west front of 1692 was commissioned from the Huguenot architect, Samuel Hauduroy, and the east front of 1704 from William Talman, architect of Chatsworth, by William Blathwayt, who was Secretary at War to William III.

Because of Blathwayt's royal connections, and his influential uncle, Thomas Povey, Dyrham became a showcase of Dutch decorative arts. The collection includes delftware, paintings and furniture. 18th century additions include furniture by Gillow and Linnell. The interiors have remained little altered since decorated by Blathwayt. The Blathwayt family lived at the house until 1956, when the government acquired it. The National Trust acquired it in 1961.

The house and gardens are open to the public on certain days, and the grounds are open all year long.

A bus takes visitors from the car park down to the house, gardens, tea room and shop. The bus road can be walked down for access to the house or there is an easy walk to the house down grassy slopes. There is no car parking at the house itself.

Dogs are not permitted into the park, but there is an exercise area for dogs near the car park.

Dyrham Park on film and television 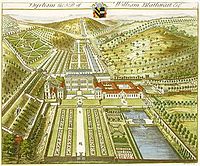 Dyrham Park is a frequent filming location. It has appeared in:

Deer in the park