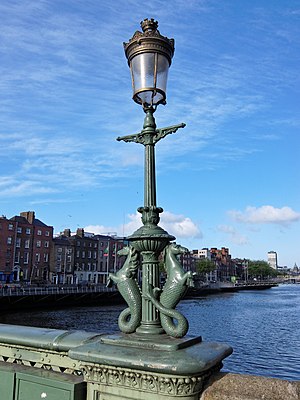 One of the ornate cast iron lamp standards on the bridge. 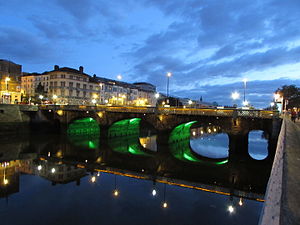 A night view of Grattan Bridge

Grattan Bridge is a road bridge spanning the River Liffey in Dublin, joining Capel Street to Parliament Street and the south quays.

The first bridge on this site was built by Sir Humphrey Jervis[2] as Essex Bridge (named for Arthur Capell, 1st Earl of Essex, Lord Lieutenant of Ireland) to join several of Jervis' developments (including Capel Street and Jervis Street) to the opposite side of the river and to Dublin Castle. Essex Bridge was an arched stone structure with seven piers, and apparently partly constructed from the ruined masonry of nearby St Mary’s Abbey on the northside.[1] In 1687 the bridge was damaged by a flood resulting in the loss of a hackney and two horses. The damage to the bridge was only partially repaired.[3]

In 1751 the second most northerly pier collapsed and damaged the adjacent arches.[1] Between 1753 and 1755 the bridge was rebuilt by George Semple, to correct flood and other structural damage and as one of the first initiatives of the Wide Streets Commission.[1] During this construction, some original features were removed. EG: A statue, by John van Nost the Elder,[4] of George I on horseback, was moved in 1798 to the gardens of the Mansion House. In 1937 it was bought by the Barber Institute for Fine Arts in Birmingham, in front of which it now stands.[5]

From 1872, the bridge was further remodelled (on Westminster Bridge in London), being widened and flattened with cast iron supports extended out from the stonework so as to carry pavements on either side of the roadway.[1] The bridge was (and is still) lit by ornate lamp standards also in cast iron.[2]

In 2003/2004 the Dublin City Council, planned and built what was intended to be a "European-style book market" on Grattan Bridge. The initiative included reconstruction of the bridge deck, with granite paving for the footpaths and a set of benches with wooden seats and toughened glass backs.

Following this development, several temporary kiosks (prefabricated in Spain) were controversially[6] built on the bridge, to create "a contemporary version of an inhabited bridge, such as the Ponte Vecchio in Florence".[7] These kiosks have since been removed.[8]

As is tradition among Dubliners, the name used locally for the bridge will vary from Capel Street Bridge, to Grattan Bridge and the original Essex Bridge.