Gosford Castle is a 19th-century country house in Gosford, a townland of Markethill, County Armagh,.

The house was built for Archibald Acheson, 2nd Earl of Gosford, and designed in the Norman revival style by London architect Thomas Hopper.

The house is a Grade A listed building,[1] and is said to be Ulster's largest.[2]

The Earls of Gosford occupied the castle until 1921, and the estate was later purchased by the Ministry of Agriculture to form Gosford Forest Park. The building subsequently deteriorated and in 2006 was sold to a development company who converted the castle into private dwellings.

The Acheson family were granted land in County Armagh by King James VI & I in 1610, at the start of the Plantation of Ulster. They established the village of Markethill and built a castle, though this was destroyed during the Irish Rebellion of 1641. A manor house was built in its place, which the Achesons occupied until 1840. The writer Jonathan Swift (1667-1745) visited Gosford and contributed to the layout of the gardens.[3]

In 1819, Archibald Acheson, 2nd Earl of Gosford (1776-1849), then head of the family, commissioned Thomas Hopper (1776–1856) to design a new house at Gosford. A Norman revival style of architecture was chosen, marking Hopper's first attempt at this style that he would go on to perfect at Penrhyn Castle in Caernarfonshire. Hopper was assisted by local architect Thomas Duff. In 1837 the building was reported as unfinished, and was not fully complete until 1859 when Hopper's assistant George Adam Burn rebuilt the entrance front.[4]

During the Second World War, Gosford was commandeered and used to accommodate troops, with a prisoner-of-war camp on the estate.[3] Following the war the Achesons sold the estate to the Ministry of Agriculture, who established the 593 acre demesne as 'Gosford Forest Park'.[5] The castle was used for the storage of public records, and in the 1970s served as a barracks for soldiers.[3]

In 1983, the castle was opened as a hotel, though this venture was not successful, and the leaseholders allowed the building to fall into disrepair.[6] 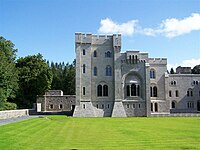 South front of the castle

The Forest Service regained control of the property in February 2002. The castle at this time was in a desperate state of disrepair and without urgent intervention was in real danger of becoming irretrievably beyond repair, leading to calls for action from the Ulster Architectural Heritage Society (UAHS).[7] The castle, with 27 acres of grounds, was put up for sale for as little as £1, subject to viable proposals for restoration.[6]

In 2006, the decaying castle was bought by Gosford Castle Development Ltd. for £1,000. The developers, supported by taxpayers' money, put forward a £4 million proposal to restore the castle as 23 apartments.[2][8] The first residents moved into their new apartments in January 2008 . In 2013 though it was reported that the redevelopment had been stalled since 2010 due to financial issues.[9]

The restoration was undertaken by a team of artisans and craftsmen, to create homes of two, three and four storeys in height set within the original fabric of the castle. The development aimed to retain the character and historic integrity of the castle by using existing staircases and walls where possible. Approaches used include the restoration of original colour schemes in the principal rooms, such as the vaulted ceiling of the Inner Hall; walls that were painted green to represent drapery; and a background of scarlet used to set off the library’s wooden bookcases. Residents began moving into the first completed homes in the castle courtyard in January 2008.