From Wikishire
Jump to: navigation, search
This article is about the town in Galway. For other uses, see Gort (disambiguation).

Gort is a town in the south of County Galway. It is to be found just north of the border with County Clare on the main N18 Galway to Limerick road.

The name of the town is from the Irish language gort, meaning "meadow". The 'official' Irish name for the town defined by the Placenames Commission An Gort ("The Meadow"). In spoken Irish, however, the town is known by its traditional name Gort Inse Guaire.

Gort is a Gaelic name meaning "Meadow", and its full Irish name, Gort Inse Guaire, means "Meadow of the island of Guaire", from Guaire Aidne mac Colmáin, the sixth century Kings of Connaught and patron of St Colman MacDuagh. During the Middle Ages the chiefs of Cenél Áeda na hEchtge, the O'Shaughnessys (Ó Seachnasaigh, a clan descended from Guaire Aidhneach) had their principal stronghold in Gort, on a site which later became a cavalry barracks.

At the end of the seventeenth century the O'Shaughnessy lands were confiscated and granted to Sir Thomas Prendergast, 1st Baronet, whose grandson was John Prendergast Smyth, 1st Viscount Gort. In 1831, the town had a population of 3,627 and 563 houses. The Great Hunger of the mid-1840s devastated the population.

The Market Square, much diminished form its height, is fronted by the Court House. On the square stands Gort Weighhouse, now owned by An Taisce; a market weigh house built around 1760 by Lord Gort, who oversaw the development of the town from a village to a major market town and a staging post on the coaching routes.

A number of other historic sites around Gort are included in the Sites and Monuments Record. Kilmacduagh monastery and round tower are situated approximately two miles west of Gort. Rahaly Castle lies approximately three miles east of Gort. 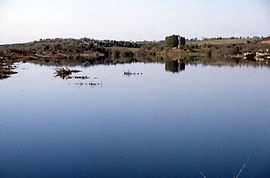 Gort railway station opened on 15 September 1869 and was closed for goods traffic on 3 November 1975 and for passenger traffic on 5 April 1976.[1] it was reopened in 2010 as part of the Western Railway Corridor project.

The M18 Motorway bypass of the town has been completed since the 12th of November 2010.

The poet William Butler Yeats renovated an old tower house near the village (Thoor Ballylee) and took up residence there. He was also a frequent visitor to the home of Augusta, Lady Gregory at nearby Coole Park. Coole Park is located just off the Galway Road, just over half a mile from the town of Gort. Thomas Laughnan, recipient of the Victoria Cross, was born in Gort.

A remarkable town; some 40% of the residents of Gort are non-Irish, according to the 2006 Census, a massive majority of these being Brazilians, who originally came to work in the meat processing plants in Gort where the pay is generally much higher than in similar plants in Brazil. According to Claire Healy "a large community of Brazilians now live, work and attend school in Gort, gradually altering the appearance and the character of the town".[2] The Roman Catholic Church caters to the Brazilian community with a mass in Portuguese every Saturday held in Gort Catholic Church.