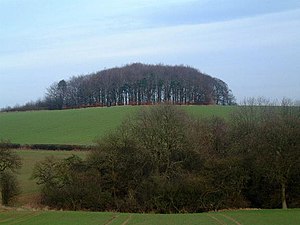 The Frankley Beeches are a tiny wood in Worcestershire, perched uncomfortably close to the junction of the M42 and M5 motorways and the swollen conurbation of the Black Country (at SO995795). To the south is the village of New Frankley, attached to the wider conurbation, while the surviving rural village of Frankley and its hamlets are to the north. Frankley Service Station on the M5 is to the northwest, though weary travellers supping at the service café would be hard put to see the trees from there.

It is no more than a small clump of trees, standing prominently on a hilltop, but there as a visible resistance to urbanisation. This cluster of beeches is a legacy of the Cadbury family, and it is now cared for by the National Trust.

Frankley Beeches is a high point in the parish and of the great landmarks. The ridge from here to Frankley Hill commands fine views, extending from the Cotswolds, Edge Hill, and the Hillsby Barr Beacon in Leicestershire and to Dudley, the Wrekin and North Clee. On a clear day one may see as far as the Berwyn Range, 70 miles away. The National Trust acquired the wood with a view to preserving it against the relently pressure of urbanisation which has swamped the acres to the south, east and west.