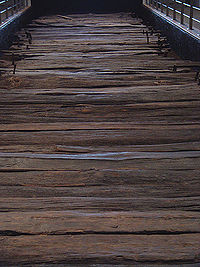 Section of the Corlea Trackway on display in Kenagh, County Longford

The Five Great Roads of Ireland are listed in an entry in the Annals of the Four Masters for AD 123. It records five principal highways (slighe) leading to Tara (Irish: Teamhair) in Early Medieval Ireland.[1] The entry in the Annals claims that these routes were 'discovered' at the birth of Conn of the Hundred Battles:

The night of Conn's birth were discovered five principal roads leading to Teamhair, which were never observed till then. These are their names: Slighe Asail, Slighe Midhluachra, Slighe Cualann, Slighe Mhór, Slighe Dala. Slighe Mhór is that called Eiscir Riada, i.e. the division line of Ireland into two parts, between Conn and Eoghan Mór.[2]

Others have suggested that "the ancient road system (such as it was, since there was no developed national system) fanned out not from Tara but from Dublin.".[3]

Unlike Roman roads, these routes were not clearly physically defined:

It is important to remember that unlike, for example, Roman roads, these medieval routes were not essentially physical entities—thin strips of land with physical boundaries; rather they were rights of way, sometimes with legal and traditional status. Routes tended to follow the line of least resistance, twisting and turning to avoid poorly drained areas and land that was easily overlooked. Where there was a hill to climb or a difficult area to pass through, multiple tracks would develop, the traveller taking the easiest route. Routes may also have varied seasonally as changing weather affected the condition of the pathway.[4]

An early medieval Irish law tract,[6] produced the first written details of different categories of roads that existed in Pre-Christian Ireland. It set out five types of road:

*the 'highway', slige, on which two carpait/carpenta [chariots] could pass without one having to give way to the other,

Conair and cai were general terms, given in Cormac's Glossary, for any type of road and "thirty-seven ancient roads [were] mentioned with the general name bealach", meaning 'pass'.[5]: Cásan was a term used for a path and a ceis was a path made of wattles.[7]

The word bóthar is now the most commonly used term for road in modern Irish: its diminutive form, bóithrín, (or boreen in English) is used as a term for very narrow, rural roads.