Firle is a village in Sussex, sitting amongst the South Downs.

The name 'Firle' is from an Old English word for 'overgrown with oak'.

The original division of East Firle and West Firle still remains in theory though East Firle is now just the houses of Heighton Street, which stand to the east of the Firle Park, while West Firle is the main village, now generally referred to simply as 'Firle'. West Firle is south of the A27 road, four miles east of Lewes.

During the reign of Edward the Confessor (1042–66) Firle was part of the Abbey of Wilton's estate. Following the Norman conquest of England the village and surrounding lands were passed to Robert, Count of Mortain, a half-brother of William the Conqueror and who was made the largest landowner in the country after the King.[1] The village is mentioned in the Domesday Book, referred to as 'Ferla'. The value of the village is listed as being £44,[2] which was amongst the highest in the county.

The manor house, the site on which Firle Place now stands, was occupied from the early 14th century by the 'de Livet' (Levett) family, an ancient Sussex gentry family of Norman descent who owned the manor.[3] The Levett family would later include founders of Sussex's iron industry, royal courtiers, knights, rectors, an Oxford University dean, a prominent early physician and medical educator, and even a lord mayor of London.[4] An ancient bronze seal found in the 1800s near Eastbourne, now in the collection of the Lewes Castle Museum, shows the coat-of-arms of John Livet and is believed to have belonged to the first member of the family named lord of Firle in 1316.[5] On the bankruptcy of lord of the manor Thomas Levett in 1440, the ownership passed to Bartholomew Bolney, whose daughter married William Gage in 1472.[6] Following the death of Bolney in 1476 without a male heir, the seat of Firle Place was passed to William Gage and has remained the seat of the Viscount Gage ever since.

During the Second World War, Firle Plantation to the south of the village was the operational base of a four-man Home Guard Auxiliary Unit.[7]

The Greengage at Firle

The commonly used word greengage almost certainly derives from a member of the Gage family, though there is some confusion over whether it was the Reverend John Gage or Sir William Gage, 7th Baronet who are both variously credited for the import of this fruit into Britain from France. 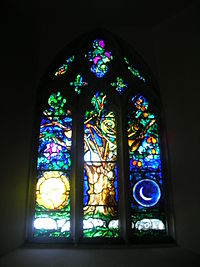 St Peter's Church notably contains an alabaster effigy of Sir John Gage wearing his Order of the Garter and lying beside his wife Philippa. It also has a stained-glass window in warm colours by John Piper, depicting Blake's Tree of Life.

The Ram Inn is the only remaining one of the village's three original public houses, that previously all acted as resting stops on the Lewes to Alfriston coach road. It was also the village court room where the rents for tenants farmers were collected and set. The area in front of the Ram is called the Beach, not to be confused with the Dock which is further up the street.

Firle Cricket Club was founded in 1758 and is said to be one of the oldest in the country. Even earlier in 1725 Sir William Gage, 7th Baronet challenged the Duke of Richmond to a game of cricket, one of the first recorded matches. The club continues to be central to village life and has two teams which both compete in the local cricket league..

South of the village are the South Downs and the hill above the village is Firle Beacon, which reaches a height of 712 feet. The beacon was once a lighting beacon used as part of a warning system during the time of the Spanish Armada in 1588. On the site there are also around 50 bronze age burial barrows.

Firle Bonfire Society is first mentioned in 1879 in a diary of the then vicar of Firle, Reverend Crawley, though it was re-formed in 1982 to encourage and promote traditional bonfire festivities in the village.[8] The society forms part of a network of bonfire societies in the Lewes area which serve the purpose both of remembering the Gunpowder Plot and of recalling the fate of the Sussex Martyrs.

The village holds its celebrations in October before the main event in Lewes. Traditionally the Firle Bonfire Society Pioneers wear Valencian costumes. It is customary to burn an effigy other than Guy Fawkes; though in 2003 an effigy of a Gypsy family in a caravan was burned, sparking a controversy that resulted in members of the bonfire society being arrested for inciting racial hatred.[9][10][11]

Firle Escarpment is a Site of Special Scientific Interest within the parish which extends into the neighbouring parish of Beddingham. The site is an extensive area of chalkland which hosts a wide range of flora. The rarest of these is the early spider orchid Ophrys sphegodes.[12]