Finavon Castle stands beside the River South Esk, about a quarter of a mile south of Milton of Finavon village and five miles to the north-east of Forfar in Angus.

The name is applied both to the 19th-century mansion house and a ruined 17th-century castle 140 yards to the east. The name also appears, in particular when applied to the ruined castle, as Finhaven Castle, and anciently Fothnevyn; this is from the Gaelic fodha-fainn, meaning 'place under a hill'.[1] 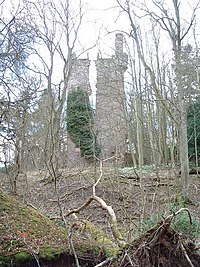 The ruin of Finhaven Castle

The estate was the property of the Lindsay Earls of Crawford from 1375, who built the castle which now stands in ruin. It was stately five-storied tower, 86 feet high, which retains its grandeur of scale even if a shattered shadow of once it was.

when Finhaven Castle rins to sand,
The warld's end is near at hand.'

After the Battle of Arbroath in 1446, David, 3rd Earl of Crawford and his brother-in-law, Ogilvy of Inverquharity, were brought here wounded though the two had fought on opposite sides. The Earl of Crawford was tortured to death within the week and his widow in revenge murdered Inverquharity, her own brother, smothering him with a pillow as he slept.

After suffering a decisive defeat at Brechin in 1452, a later Earl of Crawford fled to Finhaven and, on alighting from his horse, exclaimed that gladly would he pass seven years in hell to gain the honour of Huntly's victory. Eleven months later he was pardoned by James II., who here received a sumptuous entertainment; but the King, had sworn in his wrath 'to make the highest stone of Finhaven the lowest', and so to fulfil his oath he had a loose stone from the roof of the castle thrown down to the ground.

The peace that came after 1603 was a respite for the castles of Scotland, but overindulgence in its fruits ruined the Crawford fortunes, and in 1625 the barony of Finavon was disposed of by a forced sale to Alexander Lindsay, 2nd Lord Spynie. It passed through the Carnegie family, the Gordon Earls of Aboyne and the Gardynes.

In 1843 the Castle was bought by Thomas Gardyne| Thomas Gardyne of Middleton. Through an 18th-century marriage he came of the old Lindsay stock. His descendant, Lieutenant-Colonel Alan David Greenhill Gardyne died in 1953, leaving the estate to a daughter, Mrs Susan Mazur.[2] 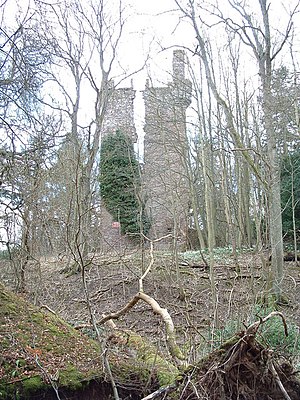 Ruins of the earlier Finavon Castle

The castle was an L-plan tower-house of five storeys, with a garret and a courtyard. The tower visible today dates from about 1600. Excavations have revealed that the tower is an adjunct tacked onto the north-east corner of a much older, more extensive structure.[2]

The house is a Scottish baronial style mansion built in 1865 for the then laird, David Greenhill Gardyne, by Messrs Carver and Symon of Arbroath.[2] Part of the castle is now let as holiday accommodation.

The nearby Finavon Doocot is Scotland's largest dovecote, with 2400 nesting boxes. It is believed to have been built for the Earl of Crawford in the 16th Century and is now maintained by the National Trust for Scotland.

On Finavon Hill, above the Castle there is a vitrified Iron Age hillfort dating from the mid-1st millennium BC.[3]