Farnborough is a village and ancient parish in Metropolitan Kent, located south-west of Orpington in the Ruxley Hundred. 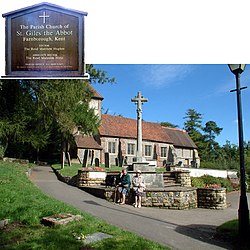 The village name derives from Fearnbiorginga, meaning village among the ferns on the hill. Old records date from 862 when Ethelbert, King of Wessex, gave away 950 acres at Farnborough. The village was not included in the Domesday Book survey, but the manor existed in the Middle Ages and was held in the 13th century by Simon de Montfort.[2]

The village evolved on the main road from London to Hastings which originally ran via Church Road and Old Hill (to the south of the village). The George pub existed in the 16th century and was used as a coaching inn. Coaches and horses were accommodated later.[2]

In 1840 the parish was included in the Metropolitan Police District.

On 30 March 2008, at about 14:40, a Cessna Citation 501 aircraft crashed into a house in Romsey Close, Farnborough.[3] Five people, two pilots and three passengers, were aboard the aircraft. There were no survivors in the aircraft, but no casualties on the ground. The aircraft had taken off from Biggin Hill, on the way to Pau in south-west France. The aircraft was attempting to return to Biggin Hill when it crashed, shortly after the pilot had issued a Mayday call.[4][5] Amongst those killed were Eurosport commentator and former Touring Car driver David Leslie and ex-Le Mans driver Richard Lloyd.[6] An investigation was launched by the Air Accidents Investigation Branch, which concluded that the accident had been caused by a missing rivet head, which may have contributed to the shutdown of one of the engines.

The Princess Royal University Hospital at Locksbottom, near Farnborough (formerly Farnborough Hospital) has an accident and emergency department and specialised units. Farnborough was one of the main filming locations for Footballers' Wives. 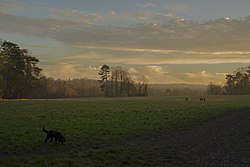