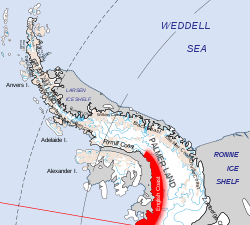 Location of the English Coast

English Coast is that portion of the coast of Antarctica between the northern tip of Rydberg Peninsula and the Buttress Nunataks. It lies on the west side of Palmer Land, at the root of the Antarctic Peninsula, running up to the Rymill Coast opposite Alexander Island. All of the English Coast is within the British Antarctic Territory, the bounds of which end at 80° West, up to the Rydberg Peninsula whose the tip, at 80° 6' W, is just outside the territory.

Further west is the Bryan Coast. Northward along the Antarctic Peninsula runs the Rymill Coast, east of Alexander Island across George VI Sound.

The English Coast was discovered and explored in 1940, on land by Finn Ronne and Carl R. Eklund and from the air by other members of the East Base of the United States Antarctic Service in 1939–41.

This coast was originally named "Robert English Coast" after Captain Robert A.J. English of the United States Navy, Executive Secretary of USAS between 1939 and 1941, and formerly Captain of the Bear of Oakland on the Byrd Antarctic Expedition, 1933–35. The name is shortened to 'English Coast' for the sake of brevity, no doubt causing confusion from Cornwall to Kent.