Edlington is a small town in the West Riding of Yorkshire, sitting to the southwest of Doncaster and Warmsworth. It had a recorded population of 8,276 at the 2001 census.

The original parish town of Edlington is now known as Old Edlington; adjacent, and to the north, is New Edlington.

The name 'Edlington' appears to be from the Old English Æþelinges tun, meaning "Prince's Village", which suggests that it was an estate owned by a prince. Local legend though holds it that Athlane, the Dane was the landowner and held of the ancient residence in the town.[1][2]

Edlington is recorded in the Domesday Book by the names Eilintone and Ellintone. Among the persons named in the entry for Old Edlington were among others Aubrey de Coucy, Earl of Northumbria, Ilbert de Lacy, Roger de Busli, Walter D'Aincourt, William 1st Baron Percy and William de Warenne, 1st Earl of Surrey.[3]

The old parish church, St Peter's Church, dates from the late 12th century, when the Norman style was becoming Transitional. It is considered a masterpiece of curious Norman carvings and has a chancel arch decorated with several rows of chevrons. The upper stage of the tower and the north chapel are Perpendicular. A Norman corbel table runs along the south exterior wall, with a variety of carved figures depicting grotesque beasts and human heads. There is a similar corbel table with carved figures inside the church, between the aisle and nave. The interior has 17th century brasses and pillars with basket and leaf decoration. There is a 15th screen, examples of Jacobean woodwork, and a font dated 1599.[4]

This church was declared redundant in 1962 when its parish was united with that of New Edlington, leaving this church in 'Old Edlington'. After suffering years of uncertainty and vandalism, St Peter's was the first church to be vested in the Churches Conservation Trust in 1971.[5][6] 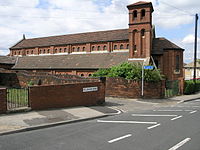 The current parish church is St John the Baptist, in New Edlington, at the junction of Main Avenue and St John's Road. A somewhat Romish church, it has passed resolutions that only male priests may preside to conduct the eucharist, which at this church is called 'mass'.

The church is currently working on a restoration project to restore the church to its former glory, when it was originally opened shortly after the opening of Yorkshire Main Colliery in the 1920s. The cost to replace the roof of the church is estimated to be in the order of £30,000 and was due to be completed during the Autumn of 2009.[7]

The Edlington (Yorkshire) Land and Development Company Limited, and the partnership which preceded it, was responsible for building a substantial part of the colliery village of New Edlington between 1909 and about 1922. The village was built to house the workers who moved into the area on the sinking of the Yorkshire Main Colliery.

The colliery was created by the Staveley Coal and Iron Company, which bought land in Edlington and leased the right to exploit the coal reserves under this and adjoining land from the Battie-Wrightson of Cusworth estate in several transactions in 1909 and 1910. William Wrightson of Cusworth had acquired the Edlington estate in 1803 from the Molesworth family, which had owned it since the late 17th century.

The Land and Development Company (and its satellite, the Edlington Co-operative Tenants Ltd.), built the streets on the north-west of Edlington Lane, bounded by Victoria Road to the north, Gordon Road to the south, and St John's Road and Church Road to the east. (It also purchased Staveley Street, to the north of Victoria Road from the original developer). Altogether, the estate as defined by deeds deposited at the National Archives comprised 557 houses and sixteen shops when completed.

Edlington Halt was a small Railway Station on the eastern terminus of the Dearne Valley Railway. The halt's first title was originally "Edlington for Balby Doncaster" (with the words 'for' and 'Doncaster' in lettering at half size compared to the others). It was built to serve the mining village of Edlington where the local mine, Yorkshire Main Colliery had been sunk and the surrounding Doncaster suburbs including that of Balby.

Like many other Railway Stations across the Dearne Valley region, Edlington Halt consisted of beds of sleepers all set at track level. The large station sign was removed in the late 1920s and replaced by a simple "Edlington" sign instead. The station was opened for passengers on 3 June 1912 and ceased on 10 September 1951.

There are two Sites of Special Scientific Interest in the parish:

Edlington Wood contains the site of an ancient Roman Settlement, which is scheduled as an Ancient Monument and considered to be a 'nationally important' archaeological site. The Settlement remains are designated and afforded protection under the Ancient Monuments and Archaeological Areas Act 1979. English Heritage also listed the site under the "Heritage at Risk Register 2009." The condition of the site is generally satisfactory, but it is considered at risk of further degradation due to significant localised problems. The site is expected to further decline in the future.[13]

Viscount Robert Molesworth The First and his wife Lady Letitia Molesworth lived in the property now known as Blow Hall Manor in the grounds of Edlington Wood in the late 17th century until the mid 18th century. Molesworth is said to have held great affection for his trusted companion a snow-white greyhound, which travelled constantly by his master's side, including the long trips between London, Ireland and Edlington.

Tradition and legend recalls that one day when Molesworth was working in the gardens of his Edlington estate, he made his way to the outside toilet when the dog pulled on his masters coat flap, and would not let him proceed. On a second attempt, the dog behaved in the same manner. Surprised at this interruption, he ordered one of his gardeners to go ahead to the outside toilet and on opening the door, was immediately shot dead by a villain there concealed, whose intention was most probably, to rob the house when the family was retired for the night.[14]

On the death of this hound years later, Robert had a monument erected to its memory. It was beneath a fine yew tree in the grounds of Blow Hall Manor in Edlington Wood, and consisted of an urn supported by a square pedestal. In the front of which was inserted a dab of white marble, on which is carved in bas-relief a figure of the dog, and also the following inscription, composed, it is said, by Dr. Lockyer Dean, of Peterborough.

The Latin inscription translated reads "Stay, traveller, Nor wonder that a lamented Dog Is thus interred with funeral honour. But ah, what a dog ! His beautiful form and snow-white colour, Pleasing manners and sportful playfulness, Affection, obedience, and fidelity, Made him the delight of his master, To whose side he closely adhered. With his eager companions of the chase, He delighted in attending him. Whenever the mind of his lord was depressed, He would assume fresh spirit and animation. A master, not ungrateful for his merits, Has here in tears deposited his remains In this marble urn." In the Year 1714.[15]

Yorkshire Main Colliery was a coal mine situated within the village of Edlington. The colliery closed in 1985.