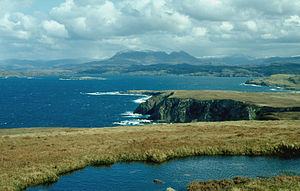 Eddrachillis Bay is a bay on the north-west coast of Sutherland, opening into the open Atlantic Ocean.

The bay lies north of Assynt and is at the mouth of Loch Cairnbawn, also known as Loch a' Chàirn Bhàin. By its shore is the parish of Eddrachillis.

This is a largely open, exposed bay with few islands apart from the scatters isles and skerries by the shore, and tiny Meall Mòr and Meall Beag in the midst of the waters