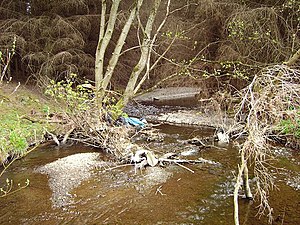 The Eddleston Water at Redscarhead

Eddleston Water is a small river in Peeblesshire which joins the River Tweed at Peebles.[1]

Locally the river is known as "The Cuddy".[2]

Eddleston Water begins in the union of burns running off the hills at Waterheads and flows from there in a course almost due south all the way to the Tweed, in a valley followed by the A703 road. It passes through Eddleston, Milkieston, Cringletie and Redscarhead before reaching the county town, Peebles, where the Tree Bridge crosses it.[3]

When the Edinburgh to Peebles railway was built in the middle of the 19th century, the river was straightened for much of its course which adversely affected the wildlife habitat and increased the speed of flow.[4] As a result, the river is liable to flooding.[5]

In August 2009 the University of Dundee was invited to carry out an initial study on how Eddleston Water could be restored to provide a better habitat for wildlife and to reduces the risk of flooding in Dalatho Dundee, Peebles and Eddleston.[4]