East Saltoun is a village in East Lothian, about five miles south-west of Haddington and 20 miles east of Edinburgh. West Saltoun, a smaller place, stands about a mile to the west. (Together they form a joint parish known simply as ‘Saltoun’.)

The villages of East Saltoun and West Saltoun, together with a large number of farms and hamlets, form the rural and mainly agriculture parish of Saltoun. The two villages lie in the foothills of the Lammermuir Hills, and are separated from each other by about one mile. To the south the villages are largely bordered by woodland: Petersmuir Wood, Dryden, and Saltoun Big Wood.

In the 12th century King David I granted lands in Saltoun to Hugh de Moreville. In 1643 the lands and barony were sold to Andrew Fletcher, and it was the Fletcher family who attempted to make Saltoun a centre of manufacturing in the early 18th century.[1] Most industry was sited in West Saltoun (formerly Milton), on the Birns Water. The first barley mill in Scotland was established there in 1712, and the British Linen Company had bleachfields in West Saltoun in 1746.[2]

In the early 19th century the Fletcher family invested further in the parish by helping to pay for a new church, manse and school in East Saltoun, and commissioning additions to Saltoun Hall (near West Saltoun).[3]

By the mid 19th century most of the parish's industries were failing, and the land was given over to agriculture. 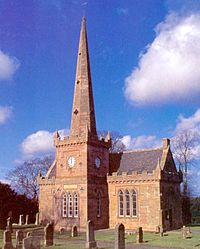 East Saltoun is the larger of the two Saltoun villages and the parish church stands here, for which reason it was formerly known as ‘Kirkton’.

The church was dedicated to St Michael. It was first consecrated in 1244, and several church buildings have been used since then. Gilbert Burnet, theologian and Bishop of Salisbury, started his ministry in Saltoun in 1665. The present building dates back to 1805, and is built in the shape of a cross with a Gothic-style tower and steeple.[4]

Local facilities include a garage, shop, village hall, blacksmith, and school. The school serves East Saltoun and West Saltoun, as well as the wider parish, and as of 2008 the roll was 49.[5]

The B6355 road runs through East Saltoun, connecting it to Gifford in the east, and Pencaitland in the northwest. A former branch railway line which linked East and West Saltoun to Gifford, Haddington and ultimately Edinburgh was closed to passengers in 1933 and is now a cycle path.