Dunwich (pronounced ˈdʌnɨtʃ) is a small village on the coast of Suffolk which was once a major town and seaport.

Dunwich was the capital of Kingdom of the East Angles 1,500 years ago and was a prosperous seaport and a centre of the wool trade during the Early Middle Ages, with a natural harbour formed by the mouths of the River Blyth and the River Dunwich. However, the harbour and most of the town has since been lost to coastal erosion.

The Domesday Book of 1086 notes that the town then had 1 carucate of land, for the sea had carried off another carucate. Dunwich nevertheless remained a busy seaport until 1286, when a sea surge hit the East Anglian coast

Over the centuries, coastal erosion has eaten away at the town until no more than today's village remains. Most of the buildings that were present in the 13th century have disappeared, including all eight churches and Dunwich is now a small coastal village, though it still claims its due status as a town.

In 2008 a project began to reveal the lost city with high-tech underwater cameras.[1] 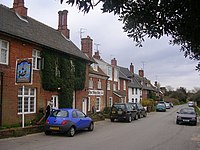 At its height Dunwich was one of the largest ports in eastern England, with a population of around 3,000, eight churches, five houses of religious orders, three chapels and two hospitals. The main exports were wool and grain and the main imports were fish, furs and timber from the Baltic and Iceland, cloth from the Netherlands and wine from France.

Dunwich is first referred to in the 7th century when St Felix of Burgundy founded the Bishopric of East Anglia at Dommoc in 632.[2] Years later antiquarians would describe it as being the 'former capital of East Anglia',[3] perhaps a romantic creation as no documents survive from the town's heyday attesting this claim.

The Domesday Book of 1086 describes Dunwich as possessing three churches. The historian and diver Stuart Bacon, who has made several visits to the seabed in a bid to find the remains of the old town, has found evidence that it may have possessed up to 18 churches and chapels at the height of its fortune during the 12th and 13th centuries.

In 1286 a large storm swept much of the town into the sea, and the River Dunwich was partly silted up. Residents fought to save the harbour but this too was destroyed by an equally fierce storm in 1328, which also swept away the entire village of Newton a few miles up the coast. Another large storm in 1347 swept some 400 houses into the sea. A quarter of the town had been lost, and most of the rest of Dunwich was lost to the sea over a period of 200–300 years through a form of coastal erosion known as "long-shore drift". Buildings on the present-day cliffs were once a mile inland.

A popular local legend says that, at certain tides, church bells can still be heard from beneath the waves.

In 1754 the antiquarian Thomas Gardner published a highly influential history of Dunwich and of the nearby towns Blythburgh and Southwold) with images of some of the lost churches.

Notwithstanding the disappearance of the town, Dunwich still held a borough charter and the right to send two members to Parliament until the Reform Act of 1832.

By the mid-19th century, the population had dwindled to 237 inhabitants and Dunwich was described as a "decayed and disfranchised borough".[4] A new church, St James, was built in 1832, after the last of the old churches, All Saints, which had been without a rector since 1755, was abandoned. All Saints' church fell into the sea between 1904 and 1919, with the last major portion of the tower succumbing on 12 November 1919.

In 1971 historian Stuart Bacon located the remains of All Saints' Church a few yards out to sea during a diving exhibition. Two years later in 1973 he also discovered the ruins of St Peter's Church which was lost to the sea during the 18th century. In 2005 Bacon located what may be the remains of the shipbuilding industry on the site.[5]

Churches and other notable structures

The ruins of All Saints' Church in Dunwich, here in a postcard of 1904

During the Second World War an RAF radar station was located at Dunwich. By the start of the war Britain had a very effective radar system called Chain Home (CH). The nearest CH station to Dunwich was at RAF High Street near Darsham. The CH system was supplemented with Chain Home Low (CHL) stations which, though having a shorter range, could detect much lower flying aircraft. Two CHL installations were situated on the cliffs at Dunwich Heath (now National Trust land). One site has been lost due to cliff erosion, but the other was further inland and will probably not be lost till early next century (at current rate of erosion). There is, however, very little left on the site. An outline of concrete post holes mark the boundary fence and the concrete base of the guard room are all that appear to survive. The foundations of the masts are believed to have been broken up for hard-core in the 1950s.

Further to the north an American centimetric radar station was established. This site is now a private caravan park. 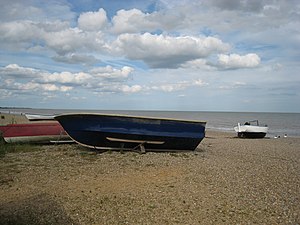 The town lies between Walberswick and Southwold to the north and Sizewell to the south and near the birdwatching areas of Dunwich Heath and Minsmere.

Dunwich is the destination of the annual semi-organised bicycle ride, the Dunwich Dynamo, which leaves Hackney in Middlesex on the Saturday night closest to the full moon in July and arrives in Dunwich on the Sunday morning.