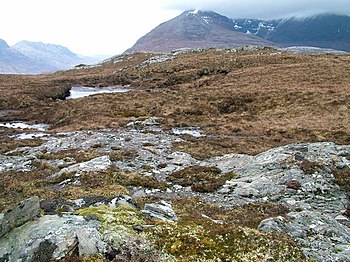 High tops in the Dundonnell Forest to An Teallach

The Dundonnell and Fisherfield Forest covers a large mountainous area of Wester Ross in the Northwest Highlands, lying between Loch Maree and Little Loch Broom. It is sometimes nicknamed The Great Wilderness, as the area is entirely devoid of permanent settlements.

The Forest is within Ross-shire, in the west of the county (and between various detached parts of Cromartyshire). Strictly speaking, the Fisherfield Forest lies to the west of Loch na Sealga and the Dundonnell Forest to the east. Between them, among the mountains east of the loch, is the Strathnasheallag Forest.

Although termed a forest the area has very few trees. It is a deer forest; an area maintained by the owners primarily for deer stalking. Three estates cover the principal area of the forest. Dundonnell Estate (52 square miles) covers the northwest part of the forest, including the northwestern flanks of An Teallach, whilst Eilean Darach estate covers 101 square miles in the northeast, including the northeast flank of An Teallach.

The majority of the area, including all the southern and central sections, forms the 125-square mile Letterewe Estate.

Two of the most famous mountains in the area are An Teallach, a twin-peaked munro which rises to the southwest of Dundonnell, and Slioch, another munro, which rises north of Loch Maree, near Kinlochewe. There is a bothy at Shenavall, and it is used occasionally by hill walkers crossing the area or to climb An Teallach. 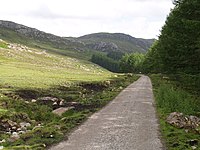