Devonshire Parish is one of the nine parishes of Bermuda. It was riginally named "Cavendish Tribe" and later "Devonshire Tribe. It is named for William Cavendish, 1st Earl of Devonshire (1552-1626), who never visited Bermuda himself, despite a parish being named after him.

Devonshire Parish is located in the centre of the territory, close to the junction between the main part of the main island and the peninsula containing the capital, Hamilton, and Pembroke Parish (to which it is joined in the west). To the northeast, it is joined to Smith's Parish, and to the southwest it borders Paget Parish. As with most of Bermuda's parishes, it covers just over 2.3 square miles. North Shore Road, Middle Road, and South Shore Road all go through this parish.

Devonshire marsh is in the centre of the parish and is on the north side of Middle Road. It was originally known as "brackish pond", which gave the parish its very first name before being officially named. It has been affected by development over the years; sections were drained for farming and commercial activities. In 1996 there was a significant fire in Devonshire marsh, but the area has recovered since then. There are two nature reserves in the marsh area for its protection - the Firefly and Freer cox nature reserves. 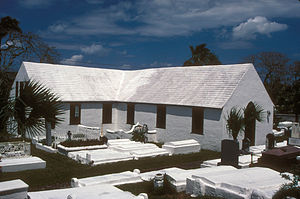 Old Devonshire Church in the parish

Other notable features of Devonshire include Devonshire Dock, Fort Langton, Fort Devonshire, the Bermuda National Stadium, the Arboretum, the Bermuda Equestrian Centre, Remnants of the British Army Headquarters, the Old Devonshire Church, the Gibbon's Nature reserves, Palm Grove Gardens, Ocean View Golf Course, and a Museum of the Old Elliot School. There are also many old, historical homes throughout the parish, but most are not open to the public. Part of the Railway trail goes through northern parts of Devonshire Parish. Are less physical feature in Bermuda.