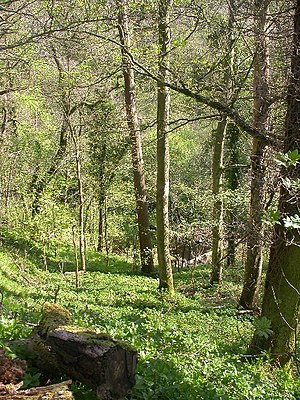 Deepdale, sometimes spelt Deep Dale, is a side valley of Teesdale, which latter dale divides Yorkshire from County Durham. Deepdale is on the south side of the Tees, in the North Riding of Yorkshire, in the lower reaches of Teesdale, by the town of Barnard Castle.

The valley is carved by the Deepdale Beck as it flows down to join the Tees opposite Barnard Castle, and as the name suggests, it carves a steep valley. Deepdale is well wooded, and is a nature reserve, known for its bird life and a population of otters.[1]

Lying by the beck is the Great Stone, a glacial erratic carried by the ancient ice from Shap in Westmorland. This is the largest erratic in Teesdale.[1]

The lower reaches of Deepdale Beck

The valley was once crossed by the Deepdale Viaduct, two miles west of Barnard Castle. The viaduct was designed by Thomas Bouch (who also designed the doomed Tay Railway Bridge, the collapse of which shocked Victorian Britain). It was built in 1861 to carry the South Durham and Lancashire Union Railway; it closed in 1962 and was dismantled in 1963.[2]

At the foot of the dale the Deepdale Aqueduct crosses the River Tees. It was built in 1898, and is a Grade II listed structure.[3]

Dearbolt army camp at Startforth used Deepdale as a training ground until the early 1960s. The road at the bottom of the dale was tarmacked with concrete bollards on each side, and further up the road there stood two nissen huts, then a little further up were ditches through which soldiers crawled beneath barbed wire in training (the ditches are still there, but the wire is gone). There were rifle ranges in the dale too.