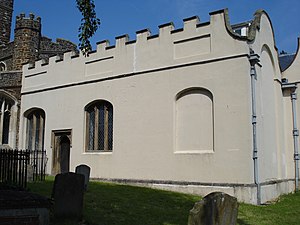 The de Grey Mausoleum in Flitton, in Bedfordshire, is one of the largest sepulchral chapels in the country. Despite its grim function, it is a Grade I listed building. The Mausoleum contains over twenty monuments to the de Grey family whose seat was at nearby Wrest Park.

The cruciform Mausoleum has its nave set against the north side of the chancel of the adjacent church of St John the Baptist and its south transept overlaps the east end. The oldest part of Mausoleum was built around 1614, the eastern parts were added in 1705. The architect Edward Shepherd worked on the building during 1739–40.

Today the mausoleum is in the guardianship of English Heritage and is open to the public.