Wrest Park is a country house and estate near Silsoe in Bedfordshire. The house is today a Grade I listed mansion, and surrounding it are Wrest Park Gardens, also Grade I listed. All is in the care of English Heritage. 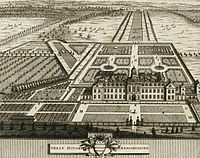 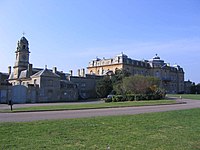 The present house was built in 1834–39, to designs by its owner Thomas de Grey, 2nd Earl de Grey, an amateur architect and the first president of the Royal Institute of British Architects, who was inspired by buildings he had seen on trips to Paris. He based his house on designs published in French architectural books such as Jacques-François Blondel's Architecture Française (1752). The works were superintended as clerk of works on site by James Clephan,[1] who had been clerk of the works at the Liddell seat, Ravensworth Castle in County Durham, and had recently served as professional amanuensis and builder for Lord Barrington. Although Nikolaus Pevsner previously stated that Clephan was a French architect who designed the present house instead of De Grey the amateur architect, as Charles Read has shown in his biography of De Grey, Clephan (born Clapham) in fact only produced drawings of the service infrastructure, such as plumbing and drainage. The decorative layout and features of the house were produced by De Grey's own hand.[2]

Wrest has some of the earliest Rococo Revival interiors in Britain. Reception rooms in the house are open to the public. 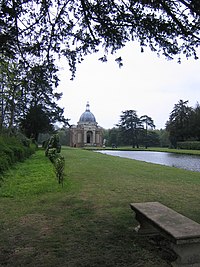 Thomas Archer Pavilion at the end of the Long Canal

Wrest Park has an early eighteenth-century garden, spread over 92 acres,[3] which was probably originally laid out by George London and Henry Wise for Henry Grey, 1st Duke of Kent, then modified by Lancelot "Capability" Brown in a more informal landscape style.

The park is divided by a wide gravel central walk, continued as a long canal that leads to a Baroque pavilion banqueting house designed by Thomas Archer and completed in 1711. The interior of the pavilion is decorated with an impressive Ionic columns in trompe-l'œil. Boundary canals were altered to take the more natural shape by Capability Brown, who worked there between 1758 and 1760, and who also ringed the central formal area with a canal and woodland. The gardens and garden houses were mapped by John Rocque in 1735.[4] During the later 18th and 19th centuries, the Bath House, an orangery and marble fountains were added.

A Wellingtonia (Sequoiadendron giganteum) planted in 1856 was in its earlier years brought into the house annually to serve as a Christmas tree, one of the earliest surviving examples known in the U.K.[5]

In the autumn of 2007 English Heritage announced that the Wolfson Foundation had pledged up to £400,000 towards the restoration of a number of the key features of the Wrest Park estate, including the mansion's formal entrance area, the garden statuary, railings and gates, and to alter the height of the carriage drive. In the next phases the lakes and canals will be restored.

On 12 September 2008 English Heritage unveiled extensive plans to restore the Grade-I-listed Wrest Park house and gardens to their original splendour.[6] In 2008 the music video for "The Fear" by Lily Allen featured interior as well as exterior scenes of Wrest Park.

In July 2011 English Heritage completed work on a new visitors' centre, car parking, exhibition space and accessible paths.[7] and the park opened to the public on 4 August 2011.[8] 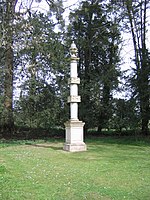 There is a memorial column dedicated to Lancelot "Capability" Brown. It was originally placed near the Bowling Green House, which was remodelled by Batty Langley in 1735, but is now located in the eastern part of the gardens. The column has the inscription: "These gardens, originally laid out by Henry Duke of Kent, were altered by Philip Earl of Hardwicke and Jemima Marchioness Grey with the professional assistance of Lancelot Brown Esq. in the years 1758, 1759, 1760."