Crosby Ravensworth is a village in Westmorland, and a fell above the village. The village is about four miles east of the M6 motorway, and Shap. 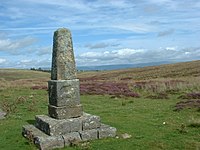 Prehistoric remains include the White Hag stone circle (54°29’50"N, 2°36’30"W). A pair of almost identical La Tène Celtic spoons dating from the Iron Age were found in Crosby Ravensworth in the nineteenth century and are now housed in the British Museum in London.[1] A more recent monument at Black Dub commemorates the visit of King Charles II in 1651, during the Third Civil War. The fell also contains one of several sites in England called Robin Hood's Grave.

Crosby Ravensworth Fell is the source of the River Lyvennet and is crossed by the Coast to Coast Walk. It features a considerable expanse of limestone pavement.