Croft Bridge spans the River Tees from Croft-on-Tees in the North Riding of Yorkshire, on the south bank of the river, to Hurworth-on-Tees in County Durham on the north bank. It is about 525 feet long from end to end, crossing west to east across the river from Croft.

This is a fine mediæval stone bridge of six spans, probably built in the 14th century, which makes it a remarkable survival. It is known that the bridge was restoredduring the reign of King Charles II in 1673, as a plaque on the parapet records, in 1781 by Thomas Bott (recorded by an inscription on south-east cutwater and widened by about 16 feet on the upstream side in 1795 by John Carr.

Today the bridge is a Grade I listed structure.[1]

The original mediæval masonry on the downstream face is of squared red sandstone while the restorations and the extended upstream face are of grey dressed and ashlar sandstone. Overall, the multi-span bridge is about with splayed end walls.

There are six double-chamfered pointed arches, on five chamfered ribs, under hoodmoulds with a smaller round arch at the eastern (Durham) end and triangular-plan cutwaters. A parapet projects on small shield-shaped brackets, and forms semi-octagonal refuges above each cutwater. 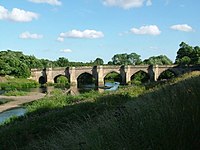 In 1356, the bridge at Croft was described as being:

in a dangerous state by the great flooding of the river

A Grant of Pontage was made to pay for its repair.

The bridge withstood the great flood of February 1753 although the turnpike house together with 50 pounds in tolls were swept away, but it was restored again in 1781 by Thomas Bott. In 1795 the great engineer John Carr, the North Riding's County Surveyor, widened the bridge upstream by about 16 feet in a style similar to that of the mediæval bridge.

Tolls formally ceased on the bridge in 1879.

Today the bridge forms part of a great ceremonial tradition. Each new Bishop of Durham crosses this bridge to enter his bishopric, and at the centre of the bridge, a sword known as the Conyers Falchion is presented to him to represent his authority. (The falchion is normally housed in the treasury of Durham Cathedral).