Eryholme is a village and civil parish in the North Riding of Yorkshire adjacent to the border with County Durham. The civil parish corresponds to the township of Eryholme in the ancient parish of GIlling.

The village is situated on the south bank of the River Tees, which forms the county border with Durham, opposite Hurworth, four and a half miles south-east of Darlington.

In this part of the Tees valley the river forms many loops called 'holmes'. The word 'holm' is of Viking origin and means "island formed by a river". Eryholme's name is, however, a corruption of its original name 'Erghum'. This name means shieling - a shelter for livestock, which comes from the Old Irish word 'airgh'. This word was introduced into Yorkshire place names by Norwegian Vikings who had lived in Ireland for a number of generations and adopted many Irish words.

The Church of St Mary the Virgin in Eryholme is a grade II* listed plain sandstone building, originally built c.1200 and modified in the 13th, 14th and 16th centuries. The registers at the church date from 1565.[1]

There are the remains of a Victorian era brick and tile works in the village.

The chief activity is farming; the farms forming part of the Neasham estate owned by the Wrightson family. Famous for the breeding of shorthorn cattle, a cow sold to the Colling brothers became part of the original stock from which was bred the Durham Ox and Comet.[2] 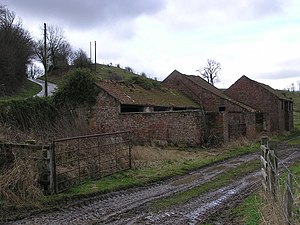 This Yorkshire article is a stub: help to improve Wikishire by building it up.
Retrieved from "https://wikishire.co.uk/w/index.php?title=Eryholme&oldid=41627"
Categories: