Congresbury is a village and parish in Somerset, seven miles east of Weston-super-Mare. The parish forms part of the Winterstoke Hundred,[2] and in 2011 had a population of 3,497.[1] It lies on the A370 road between Junction 21 of the M5 and Bristol Airport, The Congresbury Yeo river flows through the village.

The nearest railway station is at Yatton, although Congresbury once had its own railway station on the Cheddar Valley Line from Yatton to Wells. It was also the starting point for the Wrington Vale Light Railway which went to nearby Wrington and then on to Blagdon. 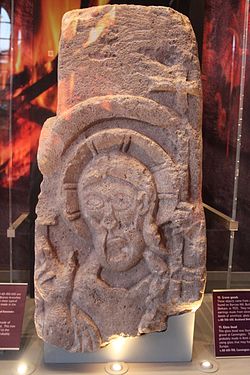 Sculpture of St Congar of Congresbury at the Museum of Somerset

Congresbury is named after St Congar, who is said to have performed three miracles in the area.[3] The second part of the name is thought to come from burh meaning fortified place.[4]

The archaeologist Mick Aston identified an Anglo-Saxon sculpture of St Congar which is believed to have come from St Andrew's Church, and which is now in the Museum of Somerset in Taunton.[8]

The village cross dates from the 15th century and is a Grade-II* listed building and Scheduled monument.[9] It is eight foot high on an octagonal plinth. The head of the cross was replaced in the early 19th century.[10]

Urchinwood Manor is a Grade-II* listed building, part of which was built around 1620 with additions being made in the 17th century.[11] The house and surrounding estate has been bought and sold many times over the centuries with the estate now being used as an equestrian centre.[12]

The Vicarage includes an early 19th-century vicarage and former Priest's House from around 1446. It has been designated as a Grade-I listed building.[13]

The village had a school founded in the 1870s that was split into separate infant and junior schools in the early 1970s. In September 2009, the two schools were re-joined as one primary school.

Congresbury is a large village and has several public houses. There is a wide variety of shops, many of them owned by individuals offering specialist products. The village precinct is centred around Brinsea Road. Opposite is Broad street, an unusually wide street suggesting it was a planned arrangement for the weekly market and annual fair.[14]

The Anglican Church of St Andrew dates from the 13th century but was extensively altered in the 15th century[15] and has been designated as a Grade I listed building.[16] 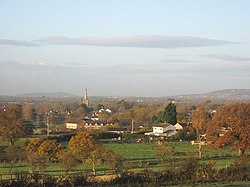 Congresbury has a King George's Field in memorial to King George V. Sporting facilities for the football club,[17] tennis club,[18] and cricket club (formed in 1844),[19][20] are provided by the umbrella organisation, the Congresbury Recreation Club.[21] The Recreation Club is also home to several skittles teams and darts teams. The village also offers fishing in purpose-built lakes and the River Yeo itself.

The hamlet of Brinsea is home to the Mendip Spring Country Club and Golf Course.

The village has many recreational groups,[23] including Cubs, Scouts and Brownies, a bell-ringing club, a youth club and the Congresbury Youth Partnership.[24]

In the heart of the village there is also a bowls club,[25] which has an annual competition open to all.

There is an annual village fete held at the primary school.

Congresbury lies next to the Strawberry Line,[26] an old railway line now converted to a pathway for walkers and cyclists to enjoy the countryside with views over the North Somerset Levels and reserves on the Congresbury Moors,[27] which is maintained by the local conservation group, YACWAG.[28]

In 2013 Congresbury became the site for The North Somerset Butterfly House, a tropical butterfly house with a remit to work with the local community and authorities to benefit local conservation initiatives, conservation based education and the local economy.[29]

Congresbury also has a medical practice, library and War Memorial Hall constructed in 1920.[14]