Condover is a village in Shropshire, about five miles south of the county town, Shrewsbury, and just east of the A49. The Cound Brook flows through the village on its way from the Stretton Hills to a confluence with the River Severn. Condover is near to the villages of Dorrington, Bayston Hill and Berrington.

Condover contains a higher than normal proportion of Listed buildings and over half of the village has been classified as a conservation area since 1976.[1] The more than forty listed structures in Condover range from six separate early cruck-framed buildings and many black-and-white timbered cottages to the present-day Vicarage and several funerary monuments in the churchyard. Of the early half-timbered houses, the most impressive are Church House, the Old School House and the Small House that is now known as Condover Court.

The parish contains two industrial estates, two sand and gravel quarries and a projected borough recycling plant is currently planned and under discussion. Villagers and the Parish Council are agreed that there should be no increase in the volume of heavy traffic in the Parish arising from the plant and would regret the detrimental effect to such village services as the post office, shops, primary school and other regular services.

In the Anglo-Saxon era between 613 and 1017 the village was the principal settlement in the Hundred of Condover, an administrative area that was large enough to sustain about 100 households. By the 11th century Condover was a royal manor of King Edward the Confessor. It formed a significant part of the great Royal forest known as The Long Forest that stretched almost the full length of South Shropshire.

The Domesday Book of 1086 records it as Conendovre, and the Norman manor house is believed to have stood on the site now occupied by Church House, a short distance north west of the Church. It would also appear that there was a mill on the Cound Brook in the village which produced a good annual income. At the time of the Domesday census, Condover was held by Roger de Montgomerie, 1st Earl of Shrewsbury, who had been granted seven-eighths of Shropshire by his cousin the new King William I in 1071. The revenues of the manor were later forfeited by Robert de Bellême, Earl Roger's heir, and returned to Royal hands under Henry I. As with other royal manors, the affairs of Condover were managed by the local sheriff, whose duty it was to keep the King's forest and manor well stocked and maintained.

In 1226, Henry III visited Shrewsbury to meet his brother-in-law, Prince Llewellyn ap Gruffydd of Wales. Henry offered Condover to Llewellyn as a goodwill gesture, but sustained wars and skirmishes on the border throughout the 13th century ensured that stable tenure of Condover manor and Hundred did not settle for nearly 300 years. 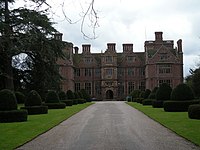 Condover hall from the front driveway

The Royal manor passed in and out of Crown's ownership until, in 1586, Elizabeth I finally made a charter grant of the Condover manor lands to Chief Justice Thomas Owen, a Member of Parliament and Recorder of Shrewsbury. Owen began the building of the current Condover Hall but died before its completion. The hall remained in the Owen family and its descendants for over 300 years.

"CONDOVER, a village, a parish, a sub-district, and a hundred, in Salop. The village stands on an affluent of the river Severn, adjacent to the Shrewsbury and Hereford railway, 4½ miles S of Shrewsbury; and has a station on the railway, and a post office under Shrewsbury. The parish includes also the villages of Chatford and Dorrington. Acres, 7, 422. Real property, £14, 431. Pop., 1, 871. Houses, 376. The property is subdivided. Condover House is the seat of E. W. S. Owen, Esq.; and was built, about 1590, by Chief Justice Owen. The living is a vicarage in the diocese of Lichfield. Value, £258.* Patron, R. Cholmondely, Esq. The church is chiefly Norman; contains monuments of the Owens, one of them by Roubiliac; and is good. The p. curacy of Dorrington is a separate benefice. Charities, £66. -The sub-district is in Atcham district; and contains fourteen parishes. Acres, 37, 057. Pop., 6, 063. Houses, 1, 157. -The hundred includes most of the sub-district; extends considerably beyond it; and is cut into the divisions of Condover and Cound. Acres, 25, 630 and 19, 684. Pop. of the whole, 6, 551. Houses, 1, 261."

Page 112 of Magna Carta Ancestry by Douglas Richardson and Kimball Everingham records that Anne Owen, daughter of Roger Owen esq and The Honourable Alice of Condover Hall, married Sir St John Booth of Dunham-Massey, Cheshire in 1662 and they had a son named Thomas in 1663.

RAF Condover was opened in August 1942 and was used variously as a fighter, bomber and a training base during the Second World War, closing in June 1945.[2] Many of the original buildings including the control tower still stand although most of the three concrete runways have been removed. RAF Condover now forms a major part of Berriewood Farm and Condover Industrial Estate. Condover Hall was commandeered as the station's officers' mess during the station's operational years.

Between the latter years of the war and the autumn of 1947 Condover was the site of a Prisoner of War camp for German airmen, who were employed as farm labourers in the local area. The prisoners were housed in the former WAAF accommodation huts at RAF Condover. Several of the POWs settled permanently in the Shrewsbury area and married local women.

The Elizabethan manor house in Condover, Condover Hall was sold to and operated by the RNIB as the residential Condover Hall School for the Blind until 2005.[3] Sold to the private Priory Educational Group, the hall later became home to Condover Horizon School for autistic children. The Priory Group closed the school and college in mid 2009 and the property was again offered for sale.

Condover in the media

The lanes, footpaths and woodlands around Condover and Bomere Pool featured in several of the mediæval detective novels about Brother Cadfael by novelist Ellis Peters.

In 1988 the BBC filmed a three part documentary about the RNIB residential school at Condover Hall and the children were filmed extensively in and around the village.

The village lies just four miles south of Shrewsbury and is separated from the county town by the main A5 trunk road. It has good road transport links with easy access to both the A49 and A5.

This is a low-lying area, towards the southern end of the Shropshire-Severn plain. The gently undulating land in the vicinity is bisected by Cound Brook, an important local tributary of the River Severn, which rises in the Stretton Hills some seven miles to the south-west.

Condover stands in the lee of an outcropping spur, consisting of a Pre-Cambrian limestone and sandstone sedimentary rock extension of the Longmyndian range, intruding into the Shropshire-Severn plain with major appearances at Longden, Lyth Hill, Bayston Hill, and Sharpstone Hill. North of the River Severn it does not outcrop again until it appears east of Shrewsbury as Haughmond Hill. There are still several active geological fault lines underlying the area and on 2 April 1990 Condover experienced an earthquake, measuring 5.4 on the Richter Scale, that was centred on Bishop's Castle on the Montgomeryshire border.

There are many small sand and gravel quarries located around the village, although the area is still very rural. It was in one of the many gravel bog sink holes near Bomere Pool that the bones of a woolly mammoth were discovered in 1986; one of the most complete mammoth skeletons ever to be found in Britain, and dated at 14,000 years old, later than the animals had been previously thought to survive in Europe.[4]

Next to Bomere Pool is a secluded traditional forest of about 125 acres of woodland that once formed part of Bayston Hill and Condover royal forest.

The parish church is Saints Andrew and Mary. It dates from the 12th century, built of finely grained local pink sandstone, quarried at Berriefield, with some recycled Roman stones, presumably brought from a local derelict farmhouse or villa.

The replacement nave dates from 1664 after the rebuilding of the crossing tower, which collapsed in 1660 also destroying the northern aisle. The three-stage western tower was added in 1678 but has a mediæval appearance. The chancel was rebuilt in 1868 by Lord of the Manor, Reginald Cholmondeley of Condover Hall who also added the northern family chapel.