Combe Moor, also known as Coombes Moor, is a small linear village in Herefordshire, located to the southeast of Presteigne, in Radnorshire and twenty miles north-west by road from Hereford. It is to be found on the B4362 road between Shobdon and Presteigne, near the meeting of the Hindwell Brook and the River Lugg. 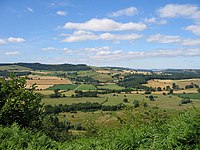 On the Herefordshire Trail towards Wapley Hillfort

The village is located on a flat plain of the River Lugg, which has hills rising at each side. During the Devensian period, "the eastward advance of the Wye Glacier blocked the preglacial Lugg at Combe Moor and the river cut a new course to the north-east before turning south-east through the east-west ridge via the Covenhope Gap."[1] Cross and Hodgson described the sediments of the Combe Moor basin in 1975 as "finely laminated and stoneless."[2]

The Herefordshire Trail long distance footpath passes through the village.

The Herefordshire Trail leads to Wapley Hillfort. There is an old schoolhouse located to the north-east along the road to Byton.

Mistletoe House in the village is a "rural tea room and gallery with a colourful garden".[3] Other cottages in the vicinity include Rue Cottage in the village itself and Wapley cottage along the lane to the south-east.