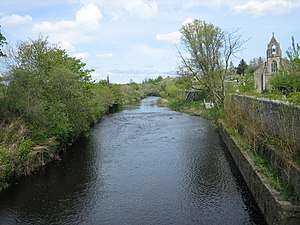 The Colebrooke River. at Maguiresbridge

The Colebrooke River is a river in Fermanagh. Its source is in the Sliabh Beagh mountains, where it is known as the Many Burns.

Colebrook Park lies on the course of the river, home of Viscount Brookeborough and his family for many generations; this family is known as the 'Fighting Brookes' for their martial endeavours, most notable of whom was Alan Brooke, later Lord Alanbrooke, Chief of the Imperial General Staff during the Second World War. The village of Brookeborough is named from the family (from Sir Henry Brooke who acquired the village in 1666) and the river takes a name from the family also.

The Colebrooke River flows in a south-westerly direction, through Maguiresbridge, before merging with the Tempo River and finally entering Upper Lough Erne near Inishcollan, Lisnaskea.[1]

The river has abundant large bream, roach, perch, rudd and pike. At the end of the season salmon and trout can be caught as they move from Lough Erne to their spawning grounds in the river's upper reaches.[2]

Some of the river is private fishing water on the Colebrooke Park estate.[3][4]