Maguiresbridge is a small village in Fermanagh. The village is named after the bridge over the Colebrooke River, first built by the local Maguire family about 1760. The village is eight miles from Enniskillen and three miles from Lisnaskea.

At the beginning of the 20th century, Maguiresbridge was served by four railways which stretched throughout Ulster. At that time, Maguiresbridge and Clones were two of the major junctions from Londonderry, Omagh, and Belfast into north Leinster, in particular, the major market towns of Athlone, Cavan, and Mullingar via the Inney junction. This back-bone rail infrastructure was administered by the Midland Great Western Railway which also linked to other major towns: namely, Sligo, Tullamore, via Clara, cities such as Dublin, Limerick, and other market towns on the south coast.

The village suffered little in the Troubles, but there was a notorious shooting incident on 11 February 1986 when off-duty member of the Royal Ulster Constabulary Derek Breen (aged 29) was shot dead by the Provisional Irish Republican Army in the Talk of the Town Bar (now the Coach Inn) and John McCabe (aged 25), who was working as a barman there, was caught in the gunfire and died on scene. 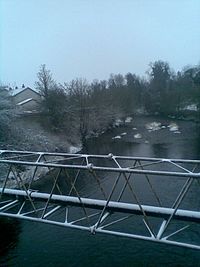 The Colebrooke River which runs through the village

Maguiresbridge grew considerably during the 2010s, with the building of five new housing developments holding 350 houses. New shops were also built during this time.[2]