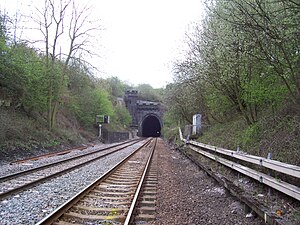 Clay Cross Tunnel is a 1,784-yard tunnel on the former North Midland Railway line near Clay Cross in Derbyshire, now part of the Midland Main Line.

It begins at the highest point of the line, just after the old Stretton railway station. Situated at the watershed of the rivers Amber and Rother it was completed by George Stephenson in 1839.

Clay Cross is directly above it and there are ventilation shafts in Market Street (around which the council have placed seats) and High Street (some 150 ft above the line).

Until the building of the tunnel, no deep prospecting for minerals had been carried out. The discovery of coal and iron led to George Stephenson moving to Tapton House, near Chesterfield. With a group of others, he bought a tract of land north of the tunnel and set up a company, George Stephenson and Co., later renamed the Clay Cross Company.

Nevertheless, the boring of the tunnel was not straightforward, eventually costing £140,000 instead of the expected £98,000, with the loss of fifteen lives.

The northern portal is a magnificent Moorish design and is now a Grade-II listed building.

Clay Cross railway station was at the northern end, where the line was met by that from the Erewash Valley.

The tunnel saw one of the first uses of the absolute block signalling system, maybe after a narrow escape on the south-bound inaugural run. The train was heavier than expected and a pilot engine was provided at the rear. This was detached at the entrance to the tunnel, but halfway through the train came to a halt, and someone had to walk back for the pilot, to the consternation of the passengers. Stephenson had been shown the system by its inventor William Fothergill Cooke supported by Wheatstone of the Wheatstone bridge fame. This was the forerunner of the Midland Railway's system.